Plato's Allegory of the Cave compares "the effect of education and the lack of it on our nature." He suggests that most people see only a shadow of reality, but they come to believe the shadow is reality.

In the allegory, one person escapes. It takes his eyes a while to adjust, but now he sees the real world for the first time. He returns to tell his companions in the cave, but they think he is insane and reject him because they prefer their shadows to the reality he has seen.

You can read more about it here, with lots of links.

Here is a common depiction: 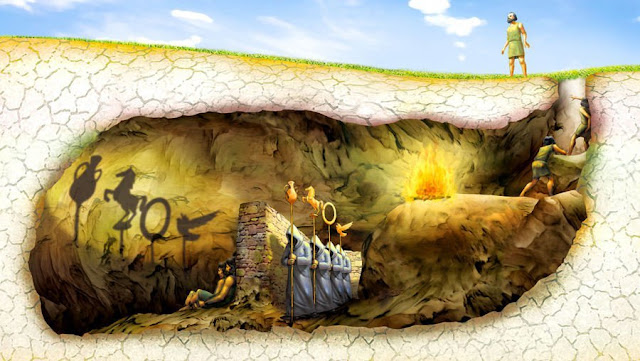 You probably already see the comparison to the Cumorah question. 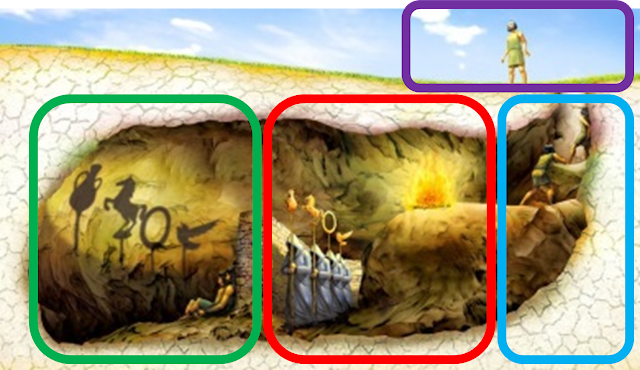 In this case, the man in the purple box represents the prophets and apostles (Joseph Smith, Oliver Cowdery, Joseph Fielding Smith, Marion G. Romney, etc.). The people in the blue box are those seeking to know what the prophets have said.

The group in the red box are the LDS scholars and educators who interpret the scriptures by the light of their own theories (Mesomania). They expect the group in the green box to see only what they tell them and not ask questions. The  red box people don't believe what the man in the purple box is telling them and they don't want the green box people to even know about it.

As we've seen throughout this blog, the LDS scholars and educators have successfully developed, promoted and perpetuated Mesomania for decades. They continue to do so. Fortunately, more and more people are escaping to discover what the prophets and apostles have said all along. People are reading Letter VII and the other references that the scholars have suppressed for decades. 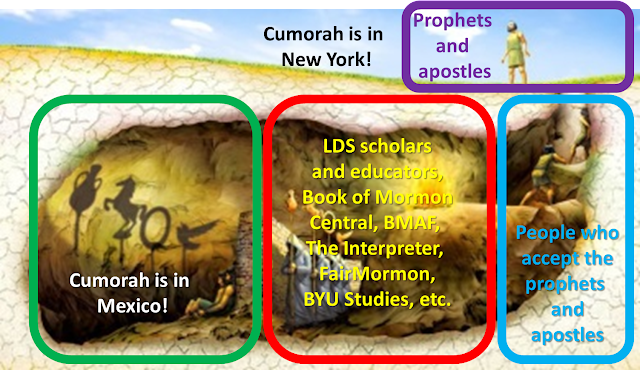 My advice: If you're still in the green box or the red box, move to the blue box.
Once we're all in the blue box, we'll all be united as we're supposed to be. We can forget the shadows and move forward with confidence and renewed faith in the prophets and apostles as we help to sweep the Earth with the Book of Mormon.

It is really that simple.