The Columbus narrative articulated by FairMormon and others claims Nephi was referring to Columbus when he wrote what is now 1 Nephi 13. I think there are other possibilities, as I've discussed before, but here's another thing to consider.
__________________

In 1 Nephi 18, Nephi describes his voyage across the sea and his arrival in the "promised land."

22 And it came to pass that I, Nephi, did guide the ship, that we sailed again towards the promised land.

Now, compare this to how he describes "Columbus" in 1 Nephi 13:

13 And it came to pass that I beheld the Spirit of God, that it wrought upon other Gentiles; and they went forth out of captivity, upon the many waters.

IOW, both Nephi and the "man among the Gentiles" sailed to "the promised land."

Here's a map showing Columbus' route of discovery. Nephi does not describe the "man among the Gentiles" making multiple voyages. He refers only to the first voyage that took him to "the seed of my brethren, who were in the promised land." For that reason, I focus on the first voyage. 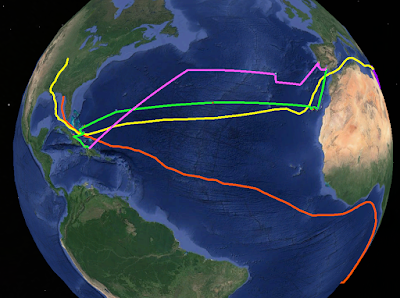 I think Lehi landed in Florida for all the reasons I've explained in Moroni's America. He may have sailed south of Cuba to get there because of ocean currents and wind, but it's interesting that Mulek, Lehi and Columbus converge on the same areas.

If you have Mesomania, you'll ignore Columbus' first voyage, the only one Nephi described, and instead focus on his later voyages where he sailed along the coast of Honduras. Then you'll say Honduras is "close enough" to Guatemala and southern Mexico.

You'll also claim that although Lehi landed on the west coast of Central America (or Chile, or Baja, or Panama), and Columbus sailed by the east coast, they both went to the same promised land.

For me, Nephi's description makes far more sense if Lehi, Mulek, and Columbus converged on the same basic place in the Caribbean. I even think Nephi's vision of "Columbus," which he had before they left the old world, helped him recognize the promised land once he arrived there.

But that's just me.