The 14th Article of Faith:

Any day now, or perhaps not until the October General Conference, the Church is going to announce a 14th Article of Faith:

Or, maybe this article of faith exists only in the minds of our M2C intellectuals.
_____

Either way, our M2C intellectuals haven't waited for the formal announcement. They've been teaching this new Article of Faith to their students for decades.

One absurd result surfaced within the last few days. A couple of bright M2C intellectuals claimed the North American setting of the Book of Mormon is fraudulent and that all of the artifacts used to support that setting have been proven to be frauds.

In reality, federal and state museums across the United States are filled with authentic artifacts taken from the very mounds that Joseph Smith himself said contained proof of the divine authenticity of the Book of Mormon.

But the followers of the M2C intellectuals know nothing of this because they have been deliberately misled.

Instead, they are firm in their faith in their M2C leaders. They believe the only evidence of the Book of Mormon is in Mesoamerica. They have Mesomania because this is what they've been taught by their BYU/CES professors and the members of the M2C citation cartel, particularly those involved with Book of Mormon Central Censor.
http://bookofmormoncensor.blogspot.com/
_____

Book of Mormon Censor has a curated archive of material related to the Book of Mormon. The curators studiously enforce M2C by censoring any material that contradicts M2C and making sure to include articles that criticize non-M2C theories.

They also promote the idea that the North American setting is based on fraudulent artifacts. At or near the top of their most popular items is an article on the Michigan relics. Another is an article that seeks to relegate the Zelph revelation to an odd folk tradition. They teach their followers that the prophets were wrong about the New York Cumorah, that the only evidence of the Book of Mormon is fraudulent, and that anyone who contradicts M2C is uneducated, ignorant, and disreputable.

Among these "Latter-day Saints who insist that the final destruction of the Nephites took place in New York" are President Marion G. Romney, Elder James E. Talmage, Elder LeGrand Richards, and many others who declared, in their writings and in General Conference, this "idea" that our M2C scholars have denounced as "manifestly absurd."

Now, with the 14th Article of Faith, our M2C intellectuals are setting the Church straight.
_____

No doubt, Book of Mormon Censor has a "Kno-Why" prepared in advance and ready to publish that will explain the 14th Article of Faith to members everywhere.
_____

You can see their handiwork here:

Part way down the page, you will see this: 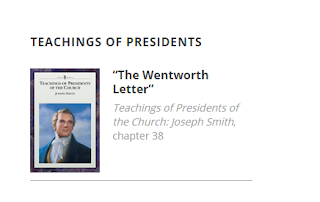 Click on it that link and it will take you here:

In the fourth paragraph from the top you'll see what Joseph asked:

Joseph was concerned that his letter might be published in parts, or edited, or misrepresented. But he didn't need to worry about Mr. Barstow.
Instead, he needed to worry about the M2C followers at the Curriculum and Correlation Departments, who did exactly what Joseph feared; i.e., they did not publish the account entire, but they edited it to misrepresent Joseph's actual teachings.
Scroll down the page a little less than half way and you will find the ellipses:

Notice: Joseph said he translated the record "through the medium of the Urim and Thummim." He didn't say he translated it with a stone in a hat.

We'll discuss this again in the upcoming post, "The Tragedy of Saints."