Did Joseph and Oliver tell the truth? 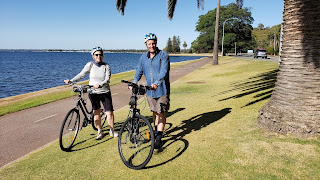 We're spending some time in Western Australia, golfing and writing. The Church is awesome here; there's a temple in Perth and about 15,000 members in this area (out of a population of 2.4 million.

Perth is the an international city; about 40% of the residents are not native Australians. People come from the UK, India, Malaysia, South Africa, and other countries around the Indian Ocean.

According to census records, the largest religious affiliation is none, followed by Roman Catholic, Anglican, Buddhism, Islam, and Hinduism.

When we attended President Nelson's visit to Singapore a few months ago, he mentioned that President Benson had said Singapore would be a center for taking the Gospel to other countries in the area. With its international character, Perth could provide a similar introduction to the Gospel.

However, that's not exactly happening.

Members here tell me the same thing I hear everywhere I go; i.e., people aren't joining the Church or staying active because their lives are so good they don't need religion.

That may be true in many cases (a topic for another day), but it seems to me there is a more fundamental problem.
_____

Everyone has implicit faith in his/her own beliefs. That's axiomatic, because otherwise they would change those beliefs. In most cases, people inherit the beliefs of their parents, peers, and society. Facts don't matter. It's basic psychology that people filter out facts that contradict their beliefs.

That's why the Restoration required something different. It required evidence of God's involvement, which came through the Book of Mormon, an ancient text about real people that was translated into English by the gift and power of God.

The fundamental premises for the Restoration rely on the testimonies of two men, primarily: Joseph Smith and Oliver Cowdery. They were the principals involved with the translation of the Book of Mormon, the restoration of the Priesthood, and the committing of the keys of the gathering and temple work.

Did Joseph Smith and Oliver Cowdery tell the truth?

My answer is yes.

But I keep being told, even by members of the Church, that the answer is really no regarding some key points.
_____

President Nelson extended an invitation to all members of the Church for 2020 that included this paragraph:

Select your own questions. Design your own plan. Act on any of these invitations to prepare yourself for sharing the important messages of the ongoing Restoration. As you seek Jesus Christ in these efforts, God will prepare you to receive further light. It is your personal preparation that will help April’s general conference become for you not only memorable but unforgettable. The time to act is now. This is a hinge point in the history of the Church, and your part is vital.

For the last few years, I've selected several questions and designed my own plan to better understand the ongoing Restoration. I've shared some of the answers on this and other blogs, in my books, and in various presentations.

I've been surprised at some of the answers. They've fortified my faith and confidence in what Joseph and Oliver claimed.

I've also been surprised at some of the opposition certain intellectuals and their employees and followers have expressed.

Because of my interest in how the Restoration is rolling forth outside the U.S., I'll explain it again.
_____

Basically, I believe Joseph Smith and Oliver Cowdery told the truth. In some intellectual circles in the Church today, that amounts to heresy.

I believe Joseph and Oliver told the truth about the translation; i.e., that Joseph translated the plates using the Urim and Thummim that Moroni provided with the original set of plates.

I believe Joseph and Oliver told the truth about the New York Cumorah; i.e., that the hill near Palmyra where Joseph found the plates was also the Hill Cumorah of Mormon 6:6, the scene of the final battles of the Jaredites and the Nephites, and the location of the repository of Nephite records.

I don't believe Joseph and Oliver misled the Church (or the world) about either of these topics.

But apparently I'm supposed to believe they did, according to certain intellectuals, lesson manuals, articles, and other materials.

It's difficult to imagine a more confusing and unbelievable way to present the Restoration than the way it is being presented in these materials.
_____

For example, I'm being told I should believe Joseph Smith produced the Book of Mormon by reading words that appeared on a stone he found in a well and then put into a hat.

I'm supposed to believe it wasn't really a translation process at all. It was merely a reading and dictation process.

I'm supposed to believe Joseph didn't even use the plates because they were covered with a cloth throughout the dictation process.

And why am I supposed to believe this?

Because David Whitmer said so in a pamphlet he wrote to persuade people to believe that (i) the Book of Mormon is true but also that (ii) Joseph Smith fell into serious errors after he dictated the Book of Mormon and (iii) the revelations in the Doctrine and Covenants are false.

The pamphlet is cited in footnote 8 in the Ensign article.

Anyone who accepts the Whitmer quotation in the Ensign as an accurate first-hand account should at least read it in context by reading Whitmer's entire pamphlet, here:

Now, imagine you're a investigator (friend) meeting with missionaries. They give you the Ensign (or the Saints book, volume 1, or the Gospel Topics Essays, all of which approvingly and uncritically quote David Whitmer's pamphlet). As a serious investigator, you look up the references. You read Whitmer's pamphlet.

By now, we all know the answer provided by certain intellectuals in the Church. They say Joseph and Oliver used substitute words.

When they wrote about the Urim and Thummim that Moroni provided with the plates, they actually meant the peep stone Joseph found in a well years earlier.

When they wrote "translation" they didn't really mean translation; instead, they meant that Joseph merely read English words that appeared on the stone in a hat.

When they wrote about the engravings on the plates, they really meant Joseph didn't use the plates at all.

When Joseph said the Title Page was a literal translation of the last leaf of the plates, we don't know how he knew that because he didn't use the plates.

And now some of them are saying that the text itself was composed by an unknown author/translator in the 1500s.

Everyone is entitled to his/her opinion about all of this, of course. But is it intellectually honest to revise the testimonies of Joseph and Oliver to fit what David Whitmer said?

Most readers here know that I think David Whitmer was relating his experience with a demonstration that Joseph conducted. I wrote a book about it.

My point in this post is that it is unrealistic to expect investigators (and youth) to believe one paragraph out of Whitmer's pamphlet while rejecting the rest--especially when that one paragraph contradicts everything else Joseph and Oliver said about the coming forth of the Book of Mormon.
_____

I'm also being told I should believe that Oliver Cowdery, Brigham Young, Wilford Woodruff, Heber C. Kimball, Lucy Mack Smith, Parley P. Pratt and others misled the Church by teaching that the Hill Cumorah of Mormon 6:6 is in western New York.

Why am I supposed to believe this?

Because a handful of LDS intellectuals embraced the so-called Two Cumorahs theory developed by RLDS scholars in the late 1800s. They taught this for decades until by 2020, most members of the Church have accepted it.

I'm supposed to believe these intellectuals because they are the "experts" hired by the prophets to guide the Church.

I'm supposed to trust these intellectuals and their employees and followers because they have advanced degrees and therefore are the only ones who can correctly interpret the scriptures.

I'm supposed to passively accept their sophistry and manipulation of the text of the Book of Mormon as they try to impose a Mesoamerican setting as the only "correct" interpretation of the text.

(I call this M2C for the Mesoamerican/two-Cumorahs theory.)

And I'm supposed to donate money to Book of Mormon Central to add to the millions of dollars they are spending to promote these ideas throughout the world.
______

Fortunately we still have an Article of Faith that allows us to each follow the dictates of our own conscience.

No one is obligated to accept M2C. We are all free to choose instead to believe the teachings of the prophets about the New York Cumorah.

But M2C is specifically depicted in the Visitors Centers. CES and BYU teach the Book of Mormon to LDS youth by using maps that depict M2C. Church historians changed Church history in the Saints book to accommodate M2C by censoring the New York Cumorah.

What are investigators (and youth in the Church) supposed to conclude when they learn how the prophets, starting with Joseph and Oliver, misled the Church about the one specific touchstone between the Book of Mormon and the real world?
_____

I think we'd all be much better off to stick with the scriptures and the teachings of the prophets, including Joseph Smith--History, instead of relying on David Whitmer's pamphlet and the efforts of intellectuals to conform the scriptures to match what David wrote.

I also think that we'd be much better off to accept and corroborate the teachings of the prophets about the New York Cumorah instead of promoting M2C.

But I'm just an ordinary member of the Church. I'm not trying to persuade anyone about anything, except I encourage everyone to make informed decisions about these issues.