Millions of people are staying home to help prevent or slow the spread of COVID-19. Many members of the Church around the world are spending their time reading and studying, preparing for General Conference. It's a good time to focus on the keystone of our religion: the Book of Mormon.

Pursuant to President Nelson's counsel that "good inspiration is based upon good information," it is important for every member of the Church to seek "good information." Although many Church members seem to just want someone to tell them what to believe, seeking the truth is an individual responsibility that we cannot delegate to others, especially when the topic involves the Book of Mormon.

On this blog, we focus on the historicity and geography of the Book of Mormon as evidence of its divine authenticity.

Yet most Church members are ignorant of those teachings. Many of those who do know what the prophets have taught have nevertheless been persuaded to reject their teachings in favor of M2C (the Mesoamerican/two-Cumorahs theory).

After all the debates about evidence, logic, history, geography, geology, anthropology, archaeology, metallurgy, language, etc., the ongoing influence of M2C boils down to three men: the M2C triumvirate.

On a personal level, I like all three of them. Each is a faithful, smart, productive and sincere member of the Church of Jesus Christ of Latter-day Saints. We can learn a lot from their work. But that has no bearing on whether we should accept their theories and teachings. 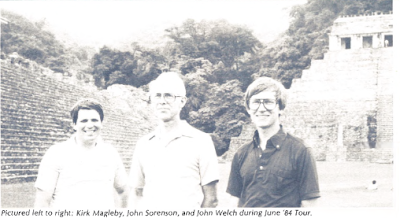 These were the founders of F.A.R.M.S. in 1979, which taught M2C from its inception. Today they are the brains behind Book of Mormon Central (BMC).

Through various channels they have taught M2C to thousands of Church members for decades.

They are the drivers of the academic cycle, whereby young Latter-day Saints are taught to understand the Book of Mormon through the lens of M2C and then go on to teach M2C to their children, students, peers, etc. The academic cycle turns theories into unquestioned assumptions that many come to believe are "true." Even when they contradict the teachings of the prophets.

Now the M2C triumvirate is raising and spending millions of dollars annually to promote M2C to the world through BMC, hiring fine young scholars and artists to spread the message that the prophets were wrong about the New York Cumorah.

All of that is fine. We're each entitled to believe whatever we want. We can donate to whatever cause we think is important. No one is an "apostate" simply because his/her beliefs contradict someone else's.

Much of what the M2C triumvirate does (apart from M2C) is awesome and deserves our support. I have learned a lot from them and continue to use the resources provided by BMC and the rest of the M2C citation cartel. I wish I could support their work 100%, but I cannot, at least not as long as they continue to undermine the teachings of the prophets about Cumorah, without at least acknowledging those teachings and the evidence that supports the prophets.
_____

The approach of BMC can be summed up in the following quotation from Brother Sorenson. Recall the long list of prophets who have taught the New York Cumorah, summarized at this link.

There are many of us Latter-day Saints who still believe those teachings. We are not ignorant, uneducated, or naive. We have sought and found evidence from various sciences that corroborates the teachings of the prophets. Original Church history documents also support the prophets.

Now, read what Brother Sorenson says about us and the teachings of the prophets:

“There remain Latter-day Saints who insist that the final destruction of the Nephites took place in New York, but any such idea is manifestly absurd. Hundreds of thousands of Nephites traipsing across the Mississippi Valley to New York, pursued (why?) by hundreds of thousands of Lamanites, is a scenario worthy only of a witless sci-fi movie, not of history.”John L. Sorenson, Mormon’s Codex (Deseret Book, 2013), p. 688.

Those who heed the words of the prophets know that Joseph Fielding Smith warned against M2C over a period of decades.

"Within recent years there has arisen among certain students of the Book of Mormon a theory to the effect that within the period covered by the Book of Mormon, the Nephites and Lamanites were confined almost entirely within the borders of the territory comprising Central America and the southern portion of Mexico-the isthmus of Tehauntepec probably being the "narrow neck" of land spoken of in the Book of Mormon rather than the isthmus of Panama.
"This modernistic theory of necessity, in order to be consistent, must place the waters of Ripliancum and the Hill Cumorah some place within the restricted territory of Central America, notwithstanding the teachings of the Church to the contrary for upwards of 100 years. Because of this theory some members of the Church have become confused and greatly disturbed in their faith in the Book of Mormon. It is for this reason that evidence is here presented to show that it is not only possible that these places could be located as the Church has held during the past century, but that in very deed such is the case."Doctrines of Salvation, comp. Bruce R. McConkie, 3:232–243.

Other members of the First Presidency have reaffirmed the New York Cumorah in General Conference. But their teachings have been rejected by the M2C scholars, particularly by the M2C triumvirate.
_____

In upcoming posts, we'll examine how the M2C triumvirate has adopted, refined, and promoted M2C over the years. It is a fascinating study that involves history, bias confirmation, cognitive dissonance, rhetoric, and more.

Setting aside personal prayer and revelation, most of us seek "good information" first from the scriptures, second from the prophets, third from original sources of Church history, data from the sciences, etc., and finally from teachers, experts, friends, the Internet, etc.

[Ask yourself, have you inverted this hierarchy of evidence?]

True, we can't become experts in everything. For some topics, we necessarily rely on teachers and experts in various fields to introduce and guide us to their areas of expertise. They can help us find good information.

But they can also deflect us from good information.

We trust teachers and experts to help us filter out irrelevant or incorrect material, but in many cases their biases instead cause them to filter out material that contradicts their own theories. If we're too deferential (and lazy), we can easily be easily manipulated into accepting their theories without making informed decisions based on good information.

And some topics don't require expertise, even when experts insist you need training for their ministry.