On May 4 I posted a comment about M2C and cognitive dissonance, showing how the M2C theory always gets back to the anonymous 1842 Times and Seasons articles.

The same day, the Joseph Smith Papers announced the release of Volume 10, covering May through August, 1842.

As expected, our friends at Book of Mormon Central, the front for Book of Mormon Archaeological Forum, Inc. (BMAF), a long-time promoter of M2C, offered their spin on Volume 10. 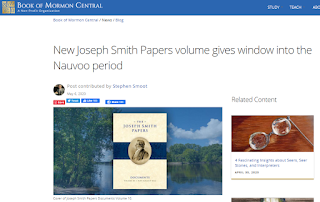 According to Book of Mormon Central, the most important material in Volume 10 are the anonymous Times and Seasons articles.

They spent half their announcement describing and summarizing these articles, including such commentary as this: "As these editorials demonstrate, Joseph Smith and other early Latter-day Saints were excited to see new discoveries seemingly vindicate the claims made in the Book of Mormon and eagerly shared this new evidence with the world."

Of course, none of these editorials said or implied anything about Cumorah, which everyone during Joseph's lifetime knew was in New York. The year before, Joseph had his brother Don Carlos publish Letter VII in the Times and Seasons. In 1844 Joseph's brother William republished Letter VII yet again in the New York City LDS newspaper titled The Prophet.

Nevertheless, our M2C friends continue to insist these anonymous 1842 editorials supersede everything the prophets have taught about the New York Cumorah.

At the bottom of the page, they offer Additional Resources including an awesome video titled "What did prophets think about Book of Mormon geography? Their old books may give clues."

Except the video omitted an important "clue" about Cumorah, which I discussed here:

People have asked about the article "4 Fascinating Insights about Seers, Seer Stones, and Interpreters" which you can see in the screen capture above.

But as we've learned from our M2C friends, once you repudiate the teachings of the prophets on one topic, it's easy to repudiate their teachings on other topics. Once you reject the New York Cumorah, you might as well also reject the Urim and Thummim and anything else that doesn't fit your worldview.

That's how confirmation bias minimizes the effect of cognitive dissonance.

And, as we always say, that's fine. People can believe whatever they want.

We continue to hope that our friends at Book of Mormon Central will someday simply offer readers a variety of faithful perspectives instead of insisting that we're only allowed to believe M2C.