Monday meme: The past keeps changing

Old Soviet joke: “The future is certain; but the past keeps changing.” 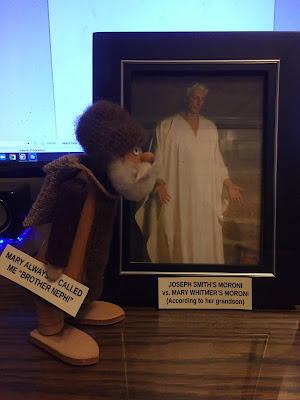 David Whitmer had conversations with both Moroni (as one of the Three Witnesses) and the divine messenger who took the abridged plates from Harmony to Cumorah before bringing the small plates of Nephi to Fayette.

David said Joseph identified the messenger as one of the Three Nephites.

Joseph's contemporaries related that Joseph interacted with both Nephi and Moroni--two separate people.

David's mother Mary also had a conversation with the messenger, whom she called Brother Nephi.

The past keeps changing.

Mary's grandson assumed she was wrong. He surmised it must have been Moroni.

Today, scholars who promote the Mesoamerican/two-Cumorahs theory (M2C) insist the prophets were wrong when they taught that Cumorah was in New York.

Mary Whitmer had to be wrong about the identity of the messenger.

Oliver Cowdery had to be wrong about Cumorah.

Martin Harris had to be wrong about Cumorah.

Everyone who taught the New York Cumorah had to be wrong.