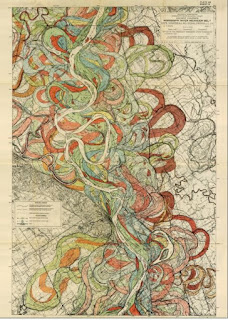 An article about the Mississippi River quotes Toni Morrison's observation:

“You know, they straightened out the Mississippi River in places, to make room for houses and livable acreage. Occasionally the river floods these places. ‘Floods’ is the word they use, but in fact it is not flooding; it is remembering. Remembering where it used to be. All water has a perfect memory and is forever trying to get back to where it was” (Morrison, 198-199).

She connects the movement of the river to the act of writing, saying, “Writers are like that: remembering where we were, what valley we ran through, what the banks were like, the light that was there and the route back to our original place. It is emotional memory—what the nerves and the skin remember as well as how it appeared” (Morrison, 199)

Perhaps the Mississippi River is remembering where it used to be in Book of Mormon times.

For those Latter-day Saints who believe the Book of Mormon took place along the rivers in North America, the spaghetti of Mississippi river courses helps explain the futility of seeing one particular spot as a Book of Mormon site. Settlements along this river have been flooded regularly for thousands of years as the river changed course.

This propensity to change course may appear in passages of the Book of Mormon.

In the Bible we read about people who build without a foundation, or who build on sand:

48 He is like a man which built an house, and digged deep, and laid the foundation on a rock: and when the flood arose, the stream beat vehemently upon that house, and could not shake it: for it was founded upon a rock.

49 But he that heareth, and doeth not, is like a man that without a foundation built an house upon the earth; against which the stream did beat vehemently, and immediately it fell; and the ruin of that house was great. (Luke 6:48–49)

24 ¶ Therefore whosoever heareth these sayings of mine, and doeth them, I will liken him unto a wise man, which built his house upon a rock:

25 And the rain descended, and the floods came, and the winds blew, and beat upon that house; and it fell not: for it was founded upon a rock.

26 And every one that heareth these sayings of mine, and doeth them not, shall be likened unto a foolish man, which built his house upon the sand:

27 And the rain descended, and the floods came, and the winds blew, and beat upon that house; and it fell: and great was the fall of it. (Matthew 7:24–27)

The Book of Mormon instead refers to a "sandy foundation," a nonbiblical term used by Jonathan Edwards and other Christian authors. E.g.,

His work shall be destroyed: the building that he hath built on a sandy foundation shall fall and perish, and he shall perish in it.

When there are contending parties that contend by argument and search and inquiry, time greatly helps that party that have truth of their side, and weakens the contrary side. It gradually wears away their sandy foundation, and rots away the building that is not made of substantial materials.

One explanation for Joseph's translation is the influence of Edwards and other Christian writers whose works Joseph had "an intimate acquaintance" with. Naturally, their terminology became part of his syntax as he translated the characters on the plates.
An alternative explanation is that the original authors, in this case Nephi and Mormon, used the concept of a "sandy foundation" when they wrote. This is distinct from the biblical concept of building directly on sand or without a foundation. When people build directly on sand or without a foundation, they have no expectation of permanence.
By contrast, a foundation requires planning and effort, implying an expectation for permanence and stability. Thus, one interpretation of the text has the Book of Mormon referring to people building on a sandy foundation, hoping for a long-term habitation, only to be washed out by flooding rivers.

40 And whoso shall declare more or less than this, and establish it for my doctrine, the same cometh of evil, and is not built upon my rock; but he buildeth upon a sandy foundation, and the gates of hell stand open to receive such when the floods come and the winds beat upon them. (3 Nephi 11:40)

13 But whoso among you shall do more or less than these are not built upon my rock, but are built upon a sandy foundation; and when the rain descends, and the floods come, and the winds blow, and beat upon them, they shall fall, and the gates of hell are ready open to receive them. (3 Nephi 18:13)