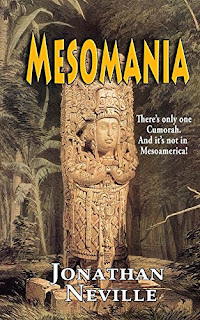 A few years ago I wrote a short book titled Mesomania. I discussed how the obsession with Mesoamerica has shaped the worldview of LDS intellectuals, including Church historians. Recently we've seen how Mesomania has led even the Joseph Smith Papers to manipulate the historical record to accommodate modern theories of geography.

We discussed how so-called problems in Church history arise from bad assumptions made in the present, such as the M2C assumption that Cumorah cannot be in New York. There is nothing--zero--in the historical record that even suggests a problem with or a question about the New York Cumorah.

Instead, the entire historical record supports the teachings of the prophets about the New York Cumorah. It is unprofessional and unconscionable for LDS historians to manipulate the historical record by censoring Cumorah--especially when their only justification is to accommodate the M2C geography theory promoted by their colleagues.

In today's Part 2, we'll consider another excerpt from the article:

Today, we can learn about the past only indirectly through the pieces that remain. Information is always lost between the past and the present. We must study the records that do survive while remembering that they do not represent the entirety of the past.

One of the records that does survive is Lucy Mack Smith's history, which I discussed here:

Faced with the historical accounts, such as Lucy Mack Smith relating that Moroni identified the hill by name the first night he met Joseph Smith, our M2C scholars respond by saying Lucy had a poor memory or was influenced by a false tradition (although they accept everything she wrote about other events).

Our M2C scholars and the Church historians who accommodate them claim that Joseph Smith never taught that Cumorah was in New York. But Lucy explained that she specifically related things which Joseph never wrote or published.

Consider one example: When Joseph Smith preached a sermon to the Saints, he typically had no prepared text, and no audio or video recording was made. Though a few in attendance may have written notes or reflections, even fewer of those notes survive. Thus, we cannot claim to know everything Joseph Smith ever said, though we can, for instance, quote Wilford Woodruff’s notes about Joseph’s sermon.

Perhaps the best example of this is the statement attributed to Joseph Smith in the Introduction to the Book of Mormon in the current LDS edition.

That's a manufactured quotation, adapted from Wilford Woodruff's summary of what Joseph Smith taught on a particular occasion. While it's bizarre to see Woodruff's third-person observation converted into a direct first-person quotation, we accept it because we assume it's "close enough" to what Joseph taught, even though Woodruff did not put it in quotation marks as he often did when recording a direct quotation.

And yet, when we have Lucy's direct quotation of what Joseph said, our historians say she must have been wrong because our scholars insist that Cumorah cannot be in New York.

One historian estimates that Joseph gave around 200 sermons for which we have no record, notes, or journal entries. We can't know what Joseph taught in those sermons, but what we do know is that those closest to him who left records, including his mother, David Whitmer, and Oliver Cowdery, all referred to the New York Cumorah as a matter of fact.

Actually, all of Joseph's contemporaries taught that Cumorah was in New York. It was common knowledge, published in all the Church newspapers during Joseph's lifetime, and copied directly into his own history.

By any standard of historical analysis, historians know there is no justification for manipulating the historical record to censor the New York Cumorah.

Yet our top LDS historians do it anyway.

In an upcoming video, we'll look at how Keith A. Erekson contradicts his own article when it comes to Cumorah.

In Part 3, we'll continue our review of this article.

"Free education is abundant, all over the internet. It’s the desire to learn that’s scarce."