Hopeful sign of a new course in LDS apologetics?

Some time ago a senior missionary who was a regular reader of the Interpreter but also liked my work asked me why Dan Peterson so frequently attacks me and other faithful Latter-day Saints who happen to disagree with Dan's tactics and content. I said I don't know (I still don't).

Then I explained how and why I had changed my own mind on issues of M2C and SITH and that I thought it makes more sense to recognize and respect multiple working hypotheses instead of insisting on only one "acceptable" interpretation--especially the M2C and SITH interpretations that repudiate what the prophets have taught. However, I told him that our LDS apologists have a long history of a persecution complex, they live in intellectual silos that lead them to think their citation cartel represents all acceptable interpretations, and that Dan named his journal accordingly, so we can hardly expect anything different.

But I also emphasized that I'm always optimistic that the apologists would someday change course and recognize that there are multiple working hypotheses that are both faithful to the teachings of the prophets and based on evidence.

There is reason for hope that this may be happening, finally.

First, some background. After the Maxwell Institute absorbed FARMS and then shed Dan Peterson as editor, it gradually distanced itself from Dan's type of apologetics.

It deleted the M2C logo for its podcasts and followed the Church's position of neutrality.

The Director, Spencer Fluhman, does an admirable job balancing competing interests. The Institute seems to be working toward respectfully acknowledging multiple working hypotheses, exactly what we all seek.

BYU Studies, when Jack Welch was editor, was a staunch promoter of M2C and SITH. It worked hand-in-hand with Book of Mormon Central (which Jack still runs as Founder and Chairman) to indoctrinate readers into believing M2C and SITH were the only permissible interpretations. It featured the Sorenson M2C maps (basically copies of the L.E. Hills map from 1917) and promoted related articles.

Unfortunately, BYU Studies still features the Sorenson M2C maps and some other legacy M2C/SITH material (such as Royal Skousen's claims that Joseph didn't translate the plates), but the new editor has taken BYU Studies in a much healthier direction. As I discussed last October, BYU Studies even published a fairly respectful discussion of multiple working hypotheses regarding Book of Mormon geography, although its editorial thumb was still firmly on M2C.

Those are positive developments we want to encourage more of.

As for the lingering members of the M2C/SITH citation cartel, the Interpreter, FAIRLDS, and Book of Mormon Central, the change has not happened yet. But we remain hopeful.

FAIRLDS released their program for their conference on August 3-5, 2022 in Provo. No presentations on M2C or SITH are listed. 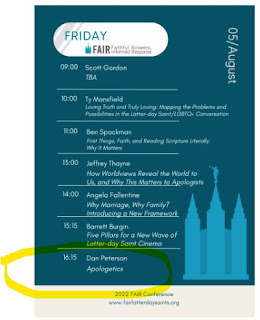 One of the traditions of the citation cartel remains, however. Dan "the Interpreter" is giving the concluding presentation. His topic: "Apologetics."

This could be awesome. Maybe Dan is going to announce a course correction. He's done that before, of course, as with his recent article on avoiding contention, published the week before the delightful reviews I've been peer reviewing on the InterpreterPeerReviews blog.

Although neither Dan nor his journal have followed his own advice in practice, I'm hopeful that now, finally, he will encourage his followers (and himself) to finally acknowledge that there are many faithful Latter-day Saints who still believe what the prophets have taught about the New York Cumorah and the translation of the Book of Mormon.

Another hopeful sign is that Scott Gordon, the President of FAIRLDS, has listed his topic as "TBA." I've talked with Scott and offered to work with him to open the dialog so that FAIRLDS could represent a range of faithful LDS answers to questions instead of insisting on M2C and SITH. To date, he has refused. If anything, he has doubled down on M2C and SITH.

But eventually, both Scott and Dan will recognize that their brand of apologetics is counterproductive. Faithful Latter-day Saints and non-LDS alike (including both former and prospective LDS) seek good information. We don't want a small group of like-minded LDS intellectuals to tell us what to think. We want access to multiple working hypotheses, fairly and accurately presented together in a spirit of respect so we can compare and contrast.

We all want to make informed decisions.

We seek unity in diversity so we can all build Zion together.

Maybe Scott and Dan will take this opportunity to announce the course correction we've all been waiting for.

I'm hopeful. That will take care of 2/3 of the lingering citation cartel.

Book of Mormon Central is another story that we'll discuss in an upcoming post.

BTW, it turns out I'll be in Utah during the FAIRLDS conference. Hopefully I can attend in person and report good news.

It's pricy, but the citation cartel is always hungry for donations...

I would happily give them their $127 (about $6/session) if FAIRLDS is actually going to change course. What do you think?

Any chance they will respectfully acknowledge multiple faithful working hypotheses?