There's an interesting essay getting a lot of discussion in the science blogs titled "The Climate Wars' Damage to Science." Here's the thesis:

The great thing about science is that it’s self-correcting. The good drives out the bad, because experiments get replicated and hypotheses tested -- or so I used to think. Now, thanks largely to climate science, I see bad ideas can persist for decades, and surrounded by myrmidons of furious defenders they become intolerant dogmas.

I find the argument persuasive, both in theory and in light of the many examples Ridley gives, There is a fascinating analogy to the Book of Mormon wars. I'm going to bold parts of the following excerpt that have an exact correspondence to Book of Mormon geography and what we see from FARMS/Maxwell Institute, FAIRMORMON, etc.

Today’s climate science, as Ian Plimer points out in his chapter in The Facts, is based on a “pre-ordained conclusion, huge bodies of evidence are ignored and analytical procedures are treated as evidence”. Funds are not available to investigate alternative theories. Those who express even the mildest doubts about dangerous climate change are ostracised, accused of being in the pay of fossil-fuel interests or starved of funds; those who take money from green pressure groups and make wildly exaggerated statements are showered with rewards and treated by the media as neutral.

Look what happened to a butterfly ecologist named Camille Parmesan when she published a paper on “Climate and Species Range” that blamed climate change for threatening the Edith checkerspot butterfly with extinction in California by driving its range northward. The paper was cited more than 500 times, she was invited to speak at the White House and she was asked to contribute to the IPCC’s third assessment report.

Unfortunately, a distinguished ecologist called Jim Steele found fault with her conclusion: there had been more local extinctions in the southern part of the butterfly’s range due to urban development than in the north, so only the statistical averages moved north, not the butterflies. There was no correlated local change in temperature anyway, and the butterflies have since recovered throughout their range. When Steele asked Parmesan for her data, she refused. Parmesan’s paper continues to be cited as evidence of climate change. Steele meanwhile is derided as a “denier”. No wonder a highly sceptical ecologist I know is very reluctant to break cover.

And yet, LDS.org continues to claim "Joseph Smith appears to have been open to the idea of migrations other than those described in the Book of Mormon" on the basis of the ridiculous Times and Seasons articles that Roper's own study shows Joseph could not have written.

Like Parmesan, Roper refuses to share his data. Given the number of data points he attributes to "Smith" on his charts (which far exceeds the number of writings definitely attributed to Joseph), he likely included some of the material Phelps and others wrote for him, which explains why some of the unsigned editorials look like Joseph's writing. But even at that, the "Central America" articles are outliers. Also like Parmesan and other climate change proponents, the Maxwell Institute continues to collect money to promote the Mesoamerican theory.

Here are Roper's graphics, with the explanations he provides. 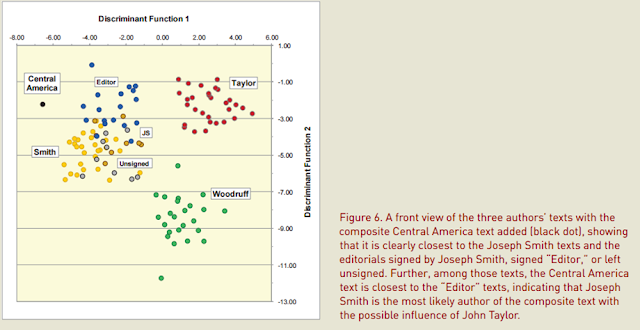 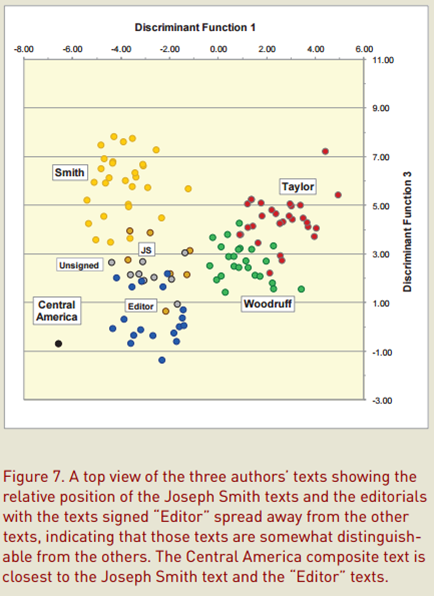 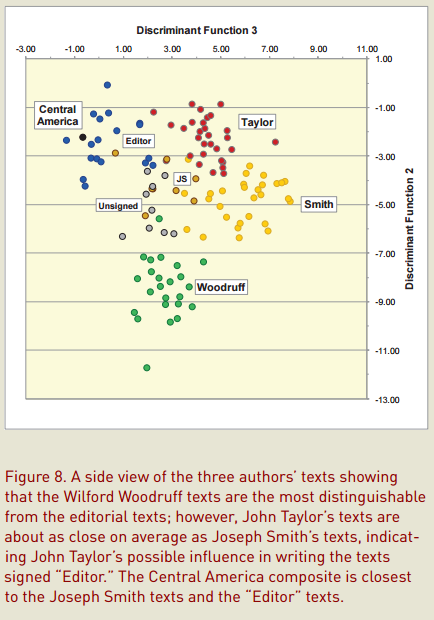