This is cross-posted from http://www.2016gospeldoctrine.com/.

2016 Gospel Doctrine –
Book of Mormon Study Guide supplements from
Moroni’s America
When we read the scriptures, it is fun and useful to think about the people in a real-world context. Many people visit Israel and the surrounding areas because of the Bible. It is striking how the Old Testament setting is also the setting for much of the New Testament. Many people also visit Church history sites for the same reason.
But what about the Book of Mormon?
As we learn more about what Joseph and Oliver Cowdery said, and what the text itself says, we discover that when we visited Church history sites in New York, Ohio, Illinois, and Missouri, we were also visiting Book of Mormon sites. We just didn’t know it.
Unlike the Bible, the Book of Mormon does not refer to places we recognize in modern times. Instead, we look to modern revelation, where there are scriptural references to the two most important places in the Book of Mormon: Cumorah and Zarahemla. The basic overview for Book of Mormon geography is right in the Doctrine and Covenants!
- Zarahemla, because two cultures joined there: the Nephites and the Mulekites. The text refers to Zarahemla far more than to any other site. Where is it? See D&C 125:3.
- Cumorah, because both civilizations ended there: the Nephites and the Jaredites. Where is it? See D&C 128:20 and Oliver Cowdery’s Letter VII.
D&C 125 and 128 have been overlooked because overzealous missionaries in 1842, including Benjamin Winchester, thought it would be a good idea to shift the focus to the exotic ruins in Central America. For Joseph Smith, building the temple and preparing the Church for his death, while also avoiding imprisonment and a host of legal problems, dominated his thinking and energy. Besides, he had already told people the locations of Cumorah, the plains of the Nephites, Zelph, Manti, and the New Jerusalem. 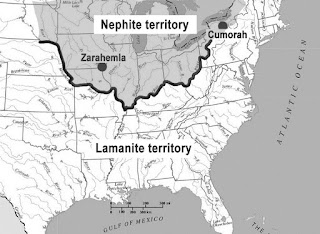 Think of Zarahemla and Cumorah as pins in the map. Then you quickly get a picture of Book of Mormon geography.
The border between the Nephites and the Lamanites was the “narrow strip of wilderness” and both the land of Zarahemla  (Nephite territory) and the land of Nephi (Lamanite territory) were “nearly surrounded by water.” Alma 22. It says water, not ocean or sea. Therefore, the border between them had to be water, with a “small neck of land” between them.  Only a river can be both “water” and a “narrow strip of wilderness.” The rivers in North America (the Missouri, Mississippi, Ohio, and Allegheny Rivers) are a perfect fit. And the small neck of land between them—where the river border ended—is not far from Cumorah, which helps explain why Cumorah was strategically important.
There are a lot of geographic details in the Book of Mormon, but with the aid of latter-day revelation and the statements of Joseph Smith and Oliver Cowdery, it becomes apparent where the Book of Mormon took place. There is a detailed analysis of the geography verses, in chronological order, inMoroni’s America. The Lost City of Zarahemla and Brought to Light explain the Church history aspects. And Letter VII: Oliver Cowdery’s Message to the World about the Hill Cumorah explains what he and Joseph knew about Moroni and Cumorah.
See more weekly lesson supplements at http://www.2016gospeldoctrine.com/.
Posted by jonathan3d at 12:56 PM