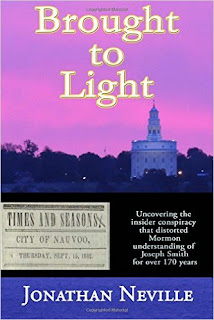 Many people following this blog have asked when Brought to Light will be released. I wanted to release it in February, but there is so much material it was a lot of work to decide what to omit. We ended up removing about 150 pages to put in another book (Tentatively titled The Editors: Joseph, William, and Don Carlos that will come out later in April). Even with that material removed and some extreme editing, the book is 424 pages now. (For various reasons my publisher wants me to cut another 50 or so pages, so this ARC probably has more material than will appear in the final version.)

We have a formal release date for Brought to Light: April 6, 2016, when it will also be available on Kindle. However, the ARC that I send to my beta readers has been going out and I thought you might be interested in an early look.

Here's the description that will be on Amazon (slightly different from what's on there now):

This book is a follow-up to The Lost City of Zarahemla. Lost City uncovered a conspiracy from 1842 in Nauvoo, Illinois, that used anonymous articles in the Times and Seasons to promote a Mesoamerican archaeology for the Book of Mormon by claiming Zarahemla was in Guatemala. Joseph knew nothing about that claim until after the paper was published. He put an end to it and resigned from the paper as a result, but the damage was done. Even today, 174 years later, many Mormon scholars cite the Zarahemla article because they are unaware of the conspiracy and continue to promote the false idea that Joseph Smith taught the Mesoamerican setting for the Book of Mormon. This book offers abundant new evidence about Benjamin Winchester and his work at the Times and Seasons that has never been published before. The new disclosures have implications beyond the Book of Mormon geography question, including clarification on what Joseph taught about the role of women in the Church.

I'll have a lot more to say about this on April 6th, but for anyone interested, you can go to Amazon, which has the ARC for $12.99. Just search for "Brought to Light" and Jonathan and you'll go right to it. (Amazon is interested in what people search for.)

Actually, there are 2 versions there; the $19.99 will be the final version on April 6, The ARC will drop from Amazon on March 25.

BTW, my beta readers send me feedback, so if you get an ARC, you're expected to do so as well.
:)

BTW 2. Some of the critics following this blog have a history of using ARCs to find fault with errors and omissions that are fixed in the final version or subsequent editions, contrary to their agreements to give me feedback on the ARC directly. Maybe this time you'll reconsider that practice?