A Gospel Topics essay on Book of Mormon geography has been posted.

I'm very happy to see this new policy because finally, it allows members of the Church to evaluate the teachings of the prophets without the M2C* filter.

(*M2C is the acronym for the Mesoamerican/two-Cumorahs theory.)

For decades I've attended Church meetings at which M2C was being taught. I learned it in my classes in Seminary and at BYU. I went to an M2C fireside just a few months ago in Utah County. There was a large crowd of members of the Church assembled in a stake center to learn about M2C. I've attended others in chapels where current BYU professors have taught M2C. Such presentations conveyed the impression to Church members that the Church approved of M2C.

Worse, there was disparate treatment of different geography theories. While M2C presentations were allowed throughout the Church (including CES and BYU), other presentations that focused on the teachings of the prophets about the Hill Cumorah in New York were aggressively banned.

This essay declares that the Church now officially has no preference for one theory over another.

In other words, from now on, Church members will have no further reason to infer that the Church endorses M2C, and anyone who states or implies otherwise is contradicting Church policy.
_____

This Gospel Topics essay is an important step toward correcting errors that have crept in over the years.

However, because the essay contains much of the same material found in the work of the M2C scholars who have written similar things for years, I'll make some suggestions for improvement in terms of clarity and accuracy.

Original in blue, my comments in red, other quotations in green.

Letter VII was published in the Times and Seasons itself in 1841 by Joseph's brother, Don Carlos, at the direction of Joseph Smith. Joseph's brother William Smith, a member of the Quorum of the Twelve at the time, republished Letter VII in the Church newspaper called The Prophet in New York City in June 1844--ironically two days after Joseph Smith was martyred in Carthage.

Today anyone can read Letter VII in Joseph Smith's personal history in the Joseph Smith Papers, here:
https://www.josephsmithpapers.org/paper-summary/history-1834-1836/90.
Footnote 2 is also misleading and should be revised. It reads, "Although it is not clear how involved Joseph Smith was in writing these editorials, he never refuted them." The footnote claims that because we have no historical records of Joseph refuting these editorials, he therefore never did refute them. By this reasoning, because we have no historical records of Joseph explicitly approving these anonymous editorials, we should conclude he didn't approve of them.

Both cases are examples of the absence of evidence fallacy. An accurate footnote would state, "Although it is not clear how involved Joseph Smith was in writing these editorials, there is no historical evidence that he ever explicitly approved of them or refuted them."

For example, this essay should mean we will see a change in the artwork, media, and visitors centers that have been portraying M2C for decades, as we've discussed on this blog many times. 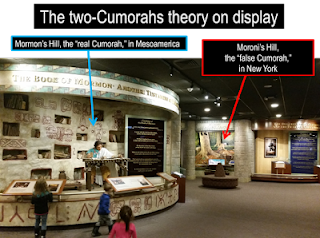 Because the Church now no longer has a position on Book of Mormon geography, we can expect a change in the visitors centers so they will no longer depict specific Book of Mormon settings, such as this display in the North Visitors Center on Temple Square that puts Mormon in a Mayan cave while Moroni is off in New York burying the plates. This display specifically teaches that there are two Cumorahs, one in New York and one in Mesoamerica.

I've discussed all of this many times on this blog and it's wonderful to see it being addressed in a Gospel Topics essay this way. 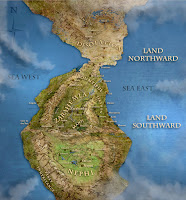 
Maybe we'll even see BYU change it's M2C-inspired fantasy map that teaches students the Book of Mormon can best be understood as taking place in a fictional, computer-generated fantasy land.
Posted by jonathan3d at 6:30 AM