"Reconciling" a square peg into a round hole

I've been following this issue of Book of Mormon historicity and geography for many years (decades, actually), which is long enough to know that the Mesoamerican apologists think all the questions have been asked and answered. They seem impervious to criticism at this point, and assume everyone else interested in the issue is either in their camp, not LDS, or is a crazy fanatical "Heartlander." They repeatedly denigrate proponents of the North American theory and even to consider the abundant archaeological evidence in New York, Ohio, Illinois, Missouri, and Iowa. They are unwilling to objectively evaluate the evidence from church history, feeling compelled to "reconcile" it with the Mesoamerican theory. But as the discussion below shows, the entire Mesoamerican theory is based on three excerpts from the Times and Seasons (not counting John Page's comments after he was excommunicated). But the T&S itself published more detailed and extensive links between specific Book of Mormon history and the archaeology of Ohio. All of Joseph Smith's personal writings, his statements recorded by others, and specific verses in the D&C are consistent with the T&S Ohio comparisons. Yet Mesoamerican theorists are compelled to discredit each of these to "reconcile" them with the Mesoamerican theory. A recent example of this was published in the Interpreter. Mark Alan Wright titled his piece:

Heartland as Hinterland: The Mesoamerican Core and North American Periphery of Book of Mormon Geography

There was a fascinating discussion over on Pathos, which I'll cover here. Dan Peterson asked about how many youth leave the Church and what can be done about it. He cited a study that, ironically, showed that LDS youth remain faithful and active through college at far higher rates than any other denomination surveyed, including Catholics, Jews and Conservative, Black, and Mainline Protestants. This seemed to have comforted most of the responders; i.e., the Church is doing pretty well, by comparison.

Contrary to the "status quo consensus," the point was raised in one comment that the Mesoamerican theory is causing many people to leave the Church, as well as deterring investigators from joining.

Most participants claimed there is no problem with the Mesoamerican theory having this impact, or that they are unaware of any such problem. That response astonishes me. Aside from my personal experience with family and friends, which admittedly is anecdotal, the blogs are replete with ridicule of the Mesoamerican theory, both from scientists and lay persons. But worse, the theory itself requires one to believe the BoM was not accurately translated, that Joseph Smith didn't know much about the Nephites, that his contemporaries (including his mother) inaccurately reported what happened, etc.

“How many youth are we losing?” 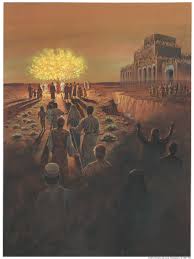 1 Nephi 8
Still very relevant
I often see claims from critics — mostly from former members — that The Church of Jesus Christ of Latter-day Saints is dying, and that, in particular, it’s hemorrhaging young people.
And perhaps we are.  Certainly, we’re losing more than I could wish.
I think often about what I, personally, might be able to do in order to help stanch the flow.
But we always did, I think.  Even back in the middle Jurassic, when I was young, we lost far too many young people.
However, I don’t see a lot of statistics.
And some critics, immersed as they are in apostate message boards and the like, may simply be confusing their little corner of the universe with the whole of it.  They may be extrapolating from a rather small and quite unrepresentative sample.
But maybe not.
Here’s a brief attempt to analyze some relevant numbers:
http://fornspollfira.blogspot.com/2014/11/how-many-youth-are-we-losing.html
Read more: http://www.patheos.com/blogs/danpeterson/2014/12/how-many-youth-are-we-losing.html#ixzz3LHOs0vnw


Then Dan posted this: