People ask why I include BYU Studies in my list of Mesomania publications.

To be clear, I love BYU Studies. I have years' worth of issues on my shelves. I use it all the time. Most of the articles are exceptionally well written and edited. And it rarely ventures into the realm of Book of Mormon geography.

However, right on its splash page, https://byustudies.byu.edu/, there are links to Mesomania materials and maps.*

If/when BYU Studies decides to offer its readers a fair and reasonable explanation that there are alternative proposals that actually support and corroborate the prophets and apostles instead of rejecting them, then we can consider it a responsible journal with respect to this topic.
So far, that hasn't happened.
_______________
Look at this one, for example. It shows a map of Mexico as the "plausible" location of Cumorah: 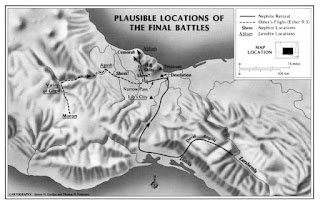 To see it, click on this link:
https://byustudies.byu.edu/book-of-mormon-charts
and then this one:
https://byustudies.byu.edu/charts/159-plausible-locations-final-battles
Explanation on the web site:
Though evidence from the Book of Mormon is not conclusive, final battles of the Nephites and the Jaredites probably took place not far north of the narrow neck of land. As shown, the Nephites marched from Angola, through David, and eventually came to the city of Joshua (see Mormon 2:4–6). Nephite defense lines lay in Joshua for fourteen years; finally they collapsed, and Nephites retreated across the narrow neck of land, fleeing to various sites (see Mormon 2:16). The hill Ramah/Cumorah, upon which both the Jaredites and Nephites fought their last battles (see Ether 15:11; Mormon 6:4–6), is shown here on the northwestern edge of the Tuxtla Mountains in Mexico, about ninety miles from a narrow pass (see Mormon 3:5). Other Jaredite locations, including Omer's flight to Ramah (see Ether 9:3), are also shown here. Again, these locations are plausible, but not definite.
______________
This map and explanation tells every reader that Cumorah in New York is not "plausible," which means Joseph and Oliver were wrong when they wrote and endorsed and repeatedly republished Letter VII.
It means every prophet and apostle who has spoken about Cumorah, including members of the First Presidency speaking in General Conference, was wrong.
All because of Mesomania.
______________

BYU Studies doesn't have to take a position on Book of Mormon geography, but it does.

If it followed the Church's policy on neutrality, BYU Studies would offer readers an alternative to consider.

It could show maps of a proposed geography such as Moroni's America that shows Cumorah in New York and thereby corroborates and supports what Joseph and Oliver and all their contemporaries and successors taught.

It's true that there are hundreds of different maps and it would be impractical to show them all. But really, the maps boil down to two categories:

1. Cumorah in New York (Joseph and Oliver and their contemporaries and successors)
2. Cumorah anywhere but New York (various LDS scholars)

For whatever reason, BYU Studies has so far told its readers only about the non-New York Cumorah scenario. It features this on its main page as if there are no viable alternatives.

I remain hopeful that someday, BYU Studies will trust its readers enough to offer them an alternative view that puts Cumorah in New York and fully explains all the geographical verses in the text.
______________
* scroll to the bottom of the page and you'll see this: