Watching General Conference with your BYU Book of Mormon professor

Imagine you are attending or watching General Conference with your BYU Book of Mormon professor or your CES instructor in seminary or Institute.

President Uchtdorf speaks. He says this:

"In the western part of the state of New York near Palmyra is a prominent hill known as the “hill Cumorah.” (Morm. 6:6.) On July twenty-fifth of this year, as I stood on the crest of that hill admiring with awe the breathtaking panorama which stretched out before me on every hand, my mind reverted to the events which occurred in that vicinity some twenty-five centuries ago—events which brought to an end the great Jaredite nation.... 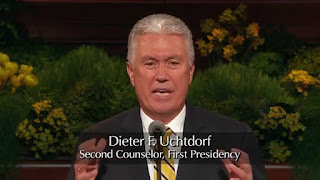 "As the conflict intensified, all the people who had not been slain—men “with their wives and their children” (Ether 15:15)—gathered about that hill Cumorah (see Ether 15:11)....
"Thus perished at the foot of Cumorah the remnant of the once mighty Jaredite nation, of whom the Lord had said, “There shall be none greater … upon all the face of the earth.” (Ether 1:43.)
"As I contemplated this tragic scene from the crest of Cumorah and viewed the beautiful land of the Restoration as it appears today, I cried in my soul, “How could it have happened?”
...
"The tragic fate of the Jaredite and the Nephite civilizations is proof positive that the Lord meant it when he said that this “is a land of promise; and whatsoever nation shall possess it shall serve God, or they shall be swept off when the fulness of his wrath shall come upon them. And the fulness of his wrath cometh upon them when they are ripened in iniquity.” (Ether 2:9.)"

When President Uchtdorf finishes, you turn to your professor and say, "That was awesome. Food for thought. We should discuss this in class."

Your professor replies, "Not so fast. He was merely expressing his opinion. And he was wrong. Cumorah is not in New York. It's in Mesoamerica. Or it's in a fantasy land, as we show on our 'internal map' here at BYU. It's anywhere except New York."

You are stunned. "But he just said it was in New York. He stood on the hill where the final battles took place."

"Yes," your professor says, "he did say that. But he was wrong, I tell you. Haven't you read BYU Studies? Or the Interpreter? Or Meridian Magazine? Or FairMormon? Or Book of Mormon Central? All the scholars agree that the prophets and apostles who have said the Hill Cumorah was in New York were wrong."
_____

If you're a BYU student now, or have been a BYU student any time in the last few decades, your Book of Mormon professor will tell you exactly what our professor said in this scenario.

They all think the prophets and apostles are wrong about Cumorah being in New York.

If I'm wrong about that--if there are any BYU Book of Mormon professors who teach--or who even believe--that Cumorah is in New York--then I'd like to know about it.

Because right now, they're teaching students that Cumorah is anywhere but in New York.
_____ 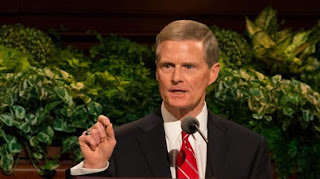 Now, let's continue with General Conference. The next speaker is Elder Bednar. He says this:

"Moroni’s father was commander of the armies of this ancient people, known as Nephites. His name was Mormon. The war of which we speak took place here in America some four hundred years after Christ. (See Morm. 6.)
"As the fighting neared its end, Mormon gathered the remnant of his forces about a hill which they called Cumorah, located in what is now the western part of the state of New York.
"Their enemies, known as Lamanites, came against them on this hill....
"When finished with the record, Moroni was to hide it up in that same Hill Cumorah which was their battlefield. It would come forth in modern times as the Book of Mormon, named after Moroni’s father, the historian who compiled it."

You turn to your professor and say, "Are you saying Elder Bednar was wrong, too?"

Your professor faces you. "Sad to say, yes. He was merely expressing his opinion. And he was wrong. Didn't I just explain what all the scholars say?"

"But don't you teach us to heed the words of the apostles?"

Your professor is losing patience. "Yes, but not when they are expressing their own opinions. In that case, we are free to disagree with them."

"How do we know when they are merely expressing their opinions?" you ask.

"That's easy." Your professor smiles. "Whenever they disagree with the consensus of BYU/CES scholars, they are expressing their opinions. And in this case, they are wrong. Cumorah cannot be in New York."
_____

Elder Bednar hasn't given the talk I quoted above. But Elder Mark. E. Petersen of the Twelve did, in the October 1978 General Conference. https://www.lds.org/general-conference/1978/10/the-last-words-of-moroni?lang=eng
_____

Another rhetorical tactic your BYU/CES educators will try is to say "The Brethren haven't spoken on this recently."

What they're saying is, 150 years of consistent teaching about Cumorah in New York is not enough.

They're trying to tell you that the Lord has to repeat things every X number of years, or we are free to reject what the prophets and apostles have taught.

My question is, why keep any records at all? Why have the scriptures, or the General Conference reports, or the records of what Joseph and Oliver and other prophets and apostles have taught, if we aren't supposed to heed them after X number of years?

And how do we come up with the X number of years? Is this in the Handbook of Instructions? Or did a committee of scholars arrive at X because they disagree with teachings that are more than X number of years old? What is the cut-off for ignoring what past prophets and apostles have taught?

In my view, 150+ years of consistent teachings on a specific topic is more than enough for us to "heed the words of the twelve." To insist that the Lord repeat the teaching periodically evinces a lack of faith.
_____

The next time some BYU or CES educator tries to tell you that the Book of Mormon took place in Central America, ask whether he/she heeds the words of the prophets and apostles.

If he/she says yes, ask about the New York Cumorah, beginning with Letter VII and continuing through General Conference.

Now, in 2017, our LDS intellectuals have pretty well universally rejected the prophets and apostles on this important issue.

Popular LDS intellectual and author Terryl Givens wrote the Foreword to this book, claiming "John Sorenson has again upped the ante with what will immediately serve as the high-water mark of scholarship on the Book of Mormon."

Sadly, Professor Givens is correct. Everyone who promotes the Mesoamerican/two-Cumorahs theory (or the latest iteration, the "internal map" being taught at BYU right now) agrees with Professor Sorenson on the Cumorah issue.

Ridiculing the prophets and apostles on this topic has become the default position of our LDS intellectuals, including those teaching at BYU and CES.*
_____

* There may be faculty at BYU or CES who believe what the prophets and apostles have taught about Cumorah. If so, they are silent. Their silence may be due to peer pressure or to institutional policy, but either way, I'd like to know about any faculty who believe Cumorah is in New York. I won't name them, but I'd like to know if there is even one in the system anywhere.

So far, from all the reports I get, all BYU/CES faculty continue to teach what Professor Sorenson taught in his book; i.e., that the idea of Cumorah in New York is "manifestly absurd."

I've even been told that one BYU professor, if he knows there are students in his class who believe in the New York Cumorah, skips over his slides that promote the Mesoamerican/two-Cumorahs theory.

Occasionally I'll hear that someone is "open" to other ideas. How is one "open" to considering the possibility that the prophets and apostles were correct? In what sense does being "open" to this idea constitute heeding the words of the apostles? (3 Nephi 12:1).

It's like saying one is "open" to the idea that the Book of Mormon is an authentic history, that Joseph Smith was a prophet of God, etc.

Being "open" to the idea that the apostles have not been wrong is a euphemism for rejecting their words.

I'm also told that BYU has implemented a policy of not linking the Book of Mormon to any actual geography. Maybe that policy was intended to stop the Mesoamerican/two-Cumorahs theory, but if that was the intent, it has utterly failed because BYU is now teaching a fantasy "internal map" based specifically on the Mesoamerican/two-Cumorahs interpretation of the text, with a computer graphic that looks exactly like what most people think is South and Central America. For sure, Cumorah on this map is not in New York.

Here's a previous post on this abstract map:
http://bookofmormonwars.blogspot.com/2016/06/abstract-maps-revisited.html