Whenever you read about Book of Mormon geography, ask yourself whether the proponent puts a question mark or an exclamation point after the words of the prophets. The contrast between the M2C* intellectuals and the prophets is stark.

In General Conference two weeks ago, Elder Neil L. Andersen of the Twelve made this observation:

Some will try to overly dissect the prophet’s words, struggling to determine what is his prophetic voice and what is his personal opinion.
In 1982, two years before being called as a General Authority, Brother Russell M. Nelson said: “I never ask myself, ‘When does the prophet speak as a prophet and when does he not?’ My interest has been, ‘How can I be more like him?’” And he added, “My [philosophy is to] stop putting question marks behind the prophet’s statements and put exclamation points instead.”
https://www.lds.org/general-conference/2018/04/the-prophet-of-god?lang=eng

The basic premise of M2C is that the prophets and apostles who have taught that Cumorah is in New York were merely expressing their "personal opinions" and were wrong.

The M2C intellectuals at BYU, CES, and the Church History and Correlation Departments not only put question marks after the teachings of the prophets and apostles, but they try to censor their words entirely. That's also what the M2C citation cartel** does.

Apply the question mark vs exclamation point test to everything you read about Book of Mormon geography. Recall that the prophets have consistently taught two things:

1. There is one hill Cumorah and it is in New York!
2. We don't know for sure where the rest of the events took place!

It is up to each of us as individuals to determine for ourselves how best to apply these teachings.

Here are some examples. Do you put an exclamation point after the teachings of the prophets, or do you put a question mark the way BYU, CES, the Church History and Correlation Departments, and the M2C citation cartel do? 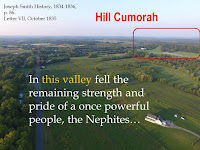 At about one mile west [of the Hill Cumorah in New York] rises another ridge of less height, running parallel with the former, leaving a beautiful vale between. The soil is of the first quality for the country, and under a state of cultivation, which gives a prospect at once imposing, when one reflects on the fact, that here, between these hills, the entire power and national strength of both the Jaredites and Nephites were destroyed. 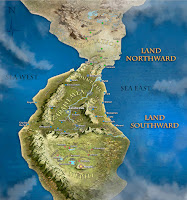 Book of Mormon classes at BYU, which every incoming student must take, teach the students that the prophets were wrong about the Hill Cumorah in New York.

Instead, students learn Book of Mormon geography by using this fantasy map. BYU professors teach students that the M2C intellectuals know more than the prophets about where Cumorah is.

Many BYU professors go beyond this fantasy map and actively teach M2C. 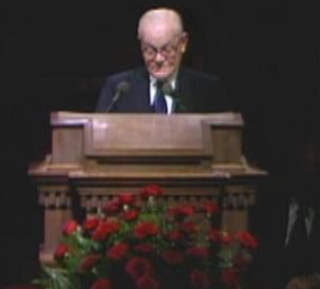 In the western part of the state of New York near Palmyra is a prominent hill known as the “hill Cumorah.” (Morm. 6:6.) On July twenty-fifth of this year, as I stood on the crest of that hill admiring with awe the breathtaking panorama which stretched out before me on every hand, my mind reverted to the events which occurred in that vicinity some twenty-five centuries ago—events which brought to an end the great Jaredite nation....

This second civilization to which I refer, the Nephites, flourished in America between 600 B.C. and A.D. 400. Their civilization came to an end for the same reason, at the same place, and in the same manner as did the Jaredites’...

Now my beloved brethren and sisters everywhere, both members of the Church and nonmembers, I bear you my personal witness that I know that the things I have presented to you today are true—both those pertaining to past events and those pertaining to events yet to come. 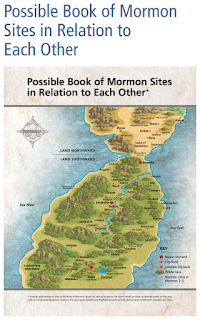 Students in Seminary and Institute are taught that the prophets were wrong about the New York Cumorah.

All around the world, in every language, CES requires students to use this fantasy map that shows Cumorah is anywhere but in New York.

There are plenty more examples of question marks within the Church. As we've seen, the problem is even more extensive than BYU and CES.

Ultimately, of course, it doesn't matter what the employees in these Church-affiliated organizations do. We each make our own choices. No prophet has ever taught that we should follow the teachings of the intellectuals in the Church instead of the teachings of the prophets.

Elder Andersen was pretty clear on what is going on with BYU, CES, and the various Departments in the Church:

Some will try to overly dissect the prophet’s words, struggling to determine what is his prophetic voice and what is his personal opinion.

The most important thing for each of us to consider is whether we, as individuals, put exclamation points or question marks after the teachings of the prophets.
_____