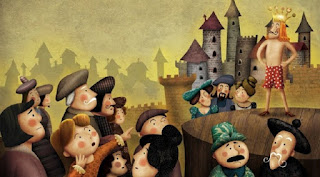 The more we learn about ancient Mesoamerican society, the less it can be construed to align with the Book of Mormon.

Experts are deciphering more and more records left by the ancient inhabitants of Central America, and the more they decipher, the more it becomes obvious that no one was quoting the Old Testament or explaining the ministry of Christ.

If, instead of rejecting what Joseph and Oliver said, we embrace it, we soon see that the text of the Book of Mormon describes North America very well. That's why I wrote Moroni's America.

Not only that, the North American setting makes sense, now and in the future.

a short tale written by Danish author Hans Christian Andersen, about two weavers who promise an emperor a new suit of clothes that they say is invisible to those who are unfit for their positions, stupid, or incompetent. When the Emperor parades before his subjects in his new clothes, no one dares to say that they don't see any suit of clothes on him for fear that they will be seen as "unfit for their positions, stupid, or incompetent". Finally, a child cries out, "But he isn't wearing anything at all!"
Posted by jonathan3d at 7:30 AM