When I was in Europe, people told me about a particularly egregious No-wise published by Book of Mormon Central America. Because it was republished by the M2C citation cartel, and because it is such a wonderful compilation of the work of the M2C intellectuals, I decided to go ahead and address it here: 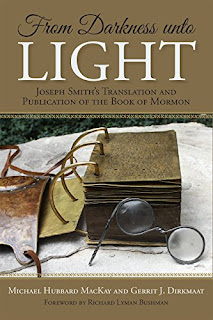 For over two years, I've thought about responding to a book on Church history that I first found interesting and then found disastrous. I've been reluctant to do so because the authors are nice guys who undoubtedly have good intentions.

But so far as I can tell, people are accepting the authors' opinions without question. Basically they're saying Joseph didn't really use the plates to translate the Book of Mormon. Instead, the plates remained covered up while Joseph merely read the translation off the stone in the hat.

This view is taking over the Church History Department and the Joseph Smith Papers. I've heard it at BYU Education Week. Presumably the Correlation Department endorses this view and it will show up in the curriculum. It's already in the new Church videos.

Because of a few things that have happened recently, it's time for me to discuss the book in detail. I'll post an analysis next week.
_____

As always, I welcome comments and input by email. I continue to learn a lot from readers!