People have wondered about the maps used in BYU Professor Tyler Griffin's presentation that FairlyMormon posted the other day, which I commented about in yesterday's post and video.

Because I suspect we'll be seeing a lot more of these in the future, I thought it's worth a blog post.

In fact, I don't know of a single person who has advocated this map.


In previous presentations, such as Education Week 2017, Brother Griffin illustrated his presentation with maps prepared by the proponents of the various models themselves.

In fact, he showed my Moroni's America map, among several others prepared by actual proponents.

Doesn't it seem more accurate to show maps prepared by proponents instead of generic maps that misrepresent what proponents actually say?

Not if you're trying to promote M2C.

In the FairlyMormon presentation, he mentioned Heartland briefly, but he spent more time on the African model, which is understandable, I suppose, given his audience.

The maps Brother Griffin used in his presentation come from here:

I like this source, even if it's a little quirky, because it has facsimiles of historic editions of the Book of Mormon so you can compare them easily.

The web page was created by KC Kern. About a year ago I wrote to Brother Kern to request changes to his Heartland map, or at least an expansion to show more alternatives. He declined.

It's no surprise that Brother Griffin used these maps because he is a collaborator with Book of Mormon Central Censor, and they are collaborating with this web page. You can see the influence by the content. 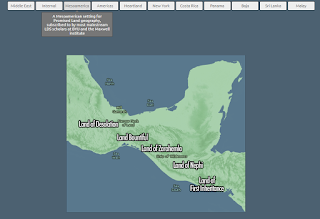 For example, if you go to the map page above and click on "Mesoamerica" you get this commentary:

A Mesoamerican setting for the Promised Land geography, subscribed to by most mainstream LDS scholars at BYU and the Maxwell Institute.

I don't know if anyone has actually polled "LDS scholars at BYU and the Maxwell Institute." If someone has seen such a poll or survey, please let me know.

But I know of several BYU scholars who still believe what the prophets teach, including the consistent and persistent teaching that there is one Cumorah and it is in New York. 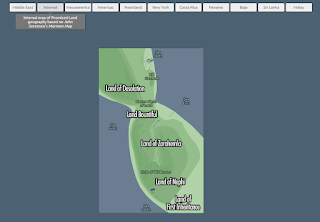 If you click on the "Internal" map, you get this one, which is basically the same as BYU's M2C fantasy map.

Of course, this so-called "internal map" is purely a product of an M2C-driven interpretation of the text.

The M2C scholars decided the prophets were wrong about Cumorah and that Joseph Smith learned about Book of Mormon geography/historicity from a popular 1841 travel book about Central America. Then they interpreted the text to fit their theory.

Brother Griffin and his collaborators at Book of Mormon Central Censor seek to enforce this interpretation of the text everywhere they can.

Hence, their M2C fantasy map that they teach to every BYU student.

It's basically the same as the CES M2C fantasy map.

Hopefully this map will never appear in the missionary editions of the Book of Mormon (perhaps in the 2020 edition).

But the artwork already teaches M2C, and since every missionary is trained by CES and/or BYU, all the youth are learning that the Book of Mormon describes a fantasy land and that the prophets are all wrong about Cumorah in New York.

The M2C theme is found throughout the web page.

If you search in the places tab for "Hill Cumorah" you get a photo of a mountain in Central America.