gnats and camels, plus F2C

People have been wondering why I haven't been blogging as often as I used to. I get a lot of message from people asking about this and that.

The short answer is, that from the perspective of those of us living in and around the Indian Ocean, M2C* is "manifestly absurd," to paraphrase BYU Professor John Sorenson (who actually applied that term to the teachings of the prophets about the New York Cumorah).

Latter-day Saints in this part of the world looks not to Mesoamerica but to America* as the home of the prophets, the site of the restoration of the Gospel and the establishment of the Church, the source of most missionaries and financial support and leadership and teachings, including not only the Book of Mormon but also the Doctrine and Covenants, Pearl of Great Price, and General Conference addresses over the decades.

They all accept the New York Cumorah because of the Introduction to the Book of Mormon: "After Mormon completed his writings, he delivered the account to his son Moroni, who added a few words of his own and hid up the plates in the Hill Cumorah."

For the most part, they don't even realize that a handful of LDS intellectuals who consider themselves "hired by the prophets to guide the Church" are still trying to persuade members of the Church to reject the prophets and accept their teachings instead. These include a core of intellectuals who form the M2C citation cartel, headed by Book of Mormon Central Censor, the Interpreter, and BYU Studies.

Nobody in this part of the world has even heard of these intellectuals or their organizations, and no one cares what they think, anyway.

Which is awesome, compared with the number of American Latter-day Saints who have chosen to follow the intellectuals instead of the prophets.
_____

The problem is that the M2C citation cartel is effectively censoring the words of the prophets that they don't like. Any time now, they will undoubtedly arrange to change the Introduction to the Book of Mormon to censor the term Cumorah the way the revisionist historians have censored the term in the book Saints. 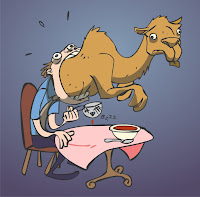 From my perspective, these intellectuals are "Blind guides, who strain at a gnat and swallow a camel." Matt 23:24, KJV.***

They strain at the simple, clear, consistent and persistent teachings of the prophets and apostles that the Hill Cumorah of Mormon 6:6 is in western New York.

And they swallow the manifestly absurd idea, never taught by a single prophet or apostle, that the Hill Cumorah of Mormon 6:6 is somewhere among the mountains of Mesoamerica.


Or worse, they swallow the even greater absurdity that Cumorah exists only in the fantasyland concocted by BYU and CES intellectuals.

[BTW, the new term for this is F2C - Fantasyland/2 Cumorahs theory.]

M2C was at least grounded in the real world.

F2C converts the Book of Mormon into a parable, a development that is already disastrous.
_____

I really like the way we have a clear choice to make.

for behold, ye are free; ye are permitted to act for yourselves; for behold, God hath given unto you a knowledge and he hath made you free. Helaman 14:30

So far, here in Africa I haven't met anyone who has chosen the scholars over the prophets. I wish I could say the same about Utah.
_____

I do have another post scheduled for tomorrow, but don't expect more daily posts any time soon.


_____
* The Mesoamerican/two-Cumorahs theory
**The United States of America.
*** Most translations render this as "strain out a gnat," which makes more sense and is a good metaphor for the way the Church History Department "strained out" the word Cumorah from the book Saints. That's a topic I've discussed on my Saints Review blog, here:
https://saintsreview.blogspot.com/
Posted by jonathan3d at 6:03 AM