BMC employees have been having fun on the Internet lately.

The M2C intellectuals who run Book of Mormon Central (and the rest of the M2C citation cartel) know the New York Cumorah is the only specific site identified by the prophets, but they teach the youth that the prophets are wrong.

It's the approach Korihor exemplified:

14 Behold, these things which ye call prophecies, which ye say are handed down by holy prophets [such as Letter VII], behold, they are foolish traditions of your fathers.

16 Ye look forward and say that ye see a remission of your sins. But behold, it is the effect of a frenzied mind; and this derangement of your minds comes because of the traditions of your fathers, which lead you away into a belief of things which are not so.

Then the M2C intellectuals hire fine young scholars to promote this message to their peers. They want the youth of the Church to trust them, the intellectuals, more than the prophets.

Whether these employees actually believe that message or not doesn't matter. They're doing their job, spreading the dogma of their employers because too many members of the Church (i) trust the intellectuals over the prophets and/or (ii) don't even know what the prophets have taught.

These intellectuals have successfully confused members of the Church by conflating two separate teachings of the prophets.

People often ask me for examples of what's going on with M2C. All anyone has to do is read the material published by the M2C citation cartel to see plenty of examples, but here's a recent example that was brought to my attention.

It's a social media comment by an employee of Book of Mormon Central (BMC) whom I won't name here because he/she is a wonderful individual who could still change his/her mind. The comment is not directed at this blog, but BMC employees have long made these same arguments, including in comments on this blog. (These employees make these same old arguments everywhere they can.)

The comment was directed at someone who still believes the prophets' teaching that the Hill Cumorah is in New York. Notice how the argument entirely avoids that issue. Instead, it conflates two unrelated issues. Original in blue, my comments in red. 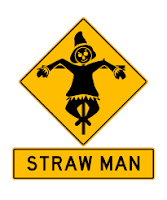 Readers of this blog recognize this straw-man tactic and the irony it contains. It's a straw man because it creates a false target to attack; i.e., it creates someone who does not acknowledge the teachings of the prophets about the land of liberty.

On this blog, we recognize and embrace all the persistent and consistent teachings of the prophets, including the ones alluded to in this paragraph.

We often refer people to the citation cartel to see what they teach. We're happy for people to see all perspectives because we want people to make informed decisions.

Here is the core M2C obfuscation. No prophet (or apostle, whom I consider prophets) has ever repudiated the New York Cumorah. Those who have addressed non-Cumorah locations have observed that we don't know for sure where the other events took place. Even Orson Pratt, the most outspoken advocate of a hemispheric model, admitted that he was speculating about everything except Cumorah.

M2C intellectuals conflate these two issues because of their own theories; i.e., they insist that Cumorah cannot be in New York because it is "too far" from Mesoamerica. Of course, that's merely circular reasoning, but these employees have heard it so often they don't even recognize the logical fallacy. Those who recognize the fallacy (the management of the M2C citation cartel) nevertheless embrace the fallacy for various reasons, including their own sunk costs, reputations, etc.

The M2C intellectuals always like to claim Joseph Smith "had opinions" about Central America, which is purely their mind-reading because the only specific evidence of what Joseph thought about the topic is Letter VII and the Wentworth letter, which repudiated Orson Pratt's Central American theory. Instead, the intellectuals rely on anonymous articles in the Times and Seasons and the phony claim that Joseph wrote the 1841 Bernhisel letter.

Notice also how this BMC employee continues to avoid the issue of Cumorah. To date, the Church has never once said the New York Cumorah is a matter of opinion. Presumably, this employee is referring to the anonymous Gospel Topics Essay on Book of Mormon Geography that was written with materials from the M2C citation cartel and has already been revised once because of obvious errors (at least one of which was still in the essay as of a few days ago, although today the url to the essay no longer works).

Of course not. Instead, they just removed the Ivins quotation altogether.

IOW, rather than correct the essay to include President Ivins' specific teachings about the New York Cumorah, which put the original essay's quotation in context, the authors censored President Ivins altogether so members of the Church would not learn what President Ivins actually taught about Cumorah.

This is exactly the type of censorship we see from the citation cartel every day.

You can see the before/after versions of the essay here:
https://presidentnelsonspeaks.blogspot.com/2019/02/revisions-to-gospel-topics-essay-on.html

To make things even worse, the BMC employee gets the point of the essay backwards. The essay asks people to avoid claiming their views are supported by the Church or the prophets. That's exactly what the M2C citation cartel does! They claim Church support on most of their web pages, at their conferences, etc.

By contrast, FIRM never claims Church support, but instead seeks to support the prophets.

[Note: FIRM is an organization that educates people about the New York Cumorah and other topics. I'm not involved with managing FIRM, but when BMC and others attack them, I sometimes point out the BMC tactics.]

If FIRM quite saying their opinions were doctrine, then things would be better. But the fact that you make your opinions doctrine, despite even the Church suggesting otherwise, creates a divide, where anyone who doesn't agree with your opinion/doctrine, is the bad guy. In my experience, the scholars I work with recognize it's all opinion.

The last line is an all-time classic, right up there with the claim of another BMC employee that the BMC scholars have been hired by the prophets to guide the Church.

"The scholars I work with recognize it's all opinion."

IOW, my bosses tell me what to say.

This is the classic rationale for rejecting the teachings of the prophets. Intellectuals have been making that argument in every age, as we see throughout the scriptures. Whenever they disagree with the prophets, they always say the prophets are wrong.

The tragic thing is, the M2C intellectuals and their employees are teaching the youth of the Church, using the New York Cumorah as an example, that everything the prophets teach is opinion.

Remember: The M2C intellectuals who run Book of Mormon Central (and the rest of the M2C citation cartel) know the New York Cumorah is the only specific site identified by the prophets, but they teach the youth that the prophets are wrong.
Posted by jonathan3d at 7:00 AM