On this blog, we seek to support and corroborate the teachings of the prophets about the New York Cumorah. We do not insist on any setting of other events, although what I call "Moroni's America" makes the most sense to me. We encourage Church members to consider alternative ideas, including variations of Heartland, Mesoamerica [not M2C*], limited New York--whatever.

We also encourage people to read the work of those who reject the teachings of the prophets about the New York Cumorah, such as the M2C citation cartel, for contrast. For example, the other day our friends at Book of Mormon Central wrote an article about how ancient societies used parts of human bodies as war trophies. It's a good point that any authentic history of an ancient society would probably include a history of war, including the use of human body parts as trophies.

They mentioned examples from Assyrian, Egyptian, and Mayan societies. That's all great, as far as it goes.

But to our surprise (not) they forgot to mention examples from North America.

If you're new to this issue, and if you've relied on the M2C citation cartel for information about the Book of Mormon, consider this advice I saw on twitter recently: "Don't be embarrassed that you did not know something you were never taught. Be proud that you are now willing to learn."
_____

For those interested in the human trophy issue, there's a great book titled The Taking and Displaying of Human Body Parts as Trophies by Amerindians, by Chacon and Dye.

In their chapter on the Hopewell, which many Latter-day Saints consider the society in which the Nephites lived (an idea that works with the New York Cumorah), they review the traditional understanding that the Hopewell were peaceful people. Then they write this: "The development of more accurate aging and sexing criteria has prompted a renewed interest in possible Hopewell trophy taking.... What they [the cited studies] have in common, regardless of interpretation, is the documentation that Hopewell trophy skulls and mandibles come from a narrow segment of the population; they are mainly young to middle-aged adults and the majority are males."

This is consistent with the description in the Book of Mormon of wars featuring young to middle-aged male adults. This is obviously a ubiquitous human feature of wars, even today, but it's important to know that the latest evidence suggests the Hopewell were not exclusively a peaceful civilization. 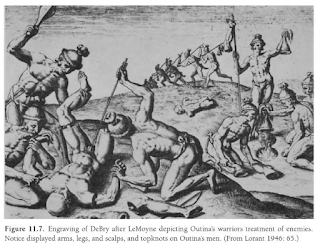 There are other examples in North America of arms as trophies. The illustration here depicts a Florida tribe.

Chacon and Dye discuss a site in South Carolina and say "There is a probability here that the arms were taken as trophies for display."

Regarding a northern Iroquois tribe, they write "Given the ethnographic record of the removal of both arms and legs during episodes of torture and the taking of arms as trophies (e.g., Biggar 1922-1936, 5:231), the presence of considerable numbers of long bones might also be expected, perhaps more arms than legs."

To repeat: we don't insist on any particular setting for the Book of Mormon, but we do believe the teachings of the prophets about the New York Cumorah, and there is abundant extrinsic evidence to support those teachings.
_____

Honest scholars who sought to inform instead of indoctrinate would not act this way. On this blog, for example, we frequently refer people to the M2C citation cartel so readers can see alternative perspectives for themselves. By contrast, Book of Mormon Central censors any material that contradicts M2C or that supports the "Heartland" or other theories.

They are especially careful to suppress and censor any material that supports the teachings of the prophets about the New York Cumorah.

We wish the M2C citation cartel, their employees and followers would simply present their evidence along with alternative evidence so Church members (and non-members) could make informed decisions. But with the example we discussed here today, it does not look likely that they will shift away from indoctrinating toward informing.