Our M2C friends often justify their repudiation of the teachings of the prophets about the New York Cumorah by claiming they stick to the "text of the Book of Mormon" and that anything the prophets have said beyond that is pure speculation.

Do you see how that is a fundamental logical thinking error?

Nowhere does the text of the Book of Mormon identify the "Western hemisphere," the "Americas," or even "America" as Lehi's land of promise.

There is no basis in the text for looking at any particular part of the world. 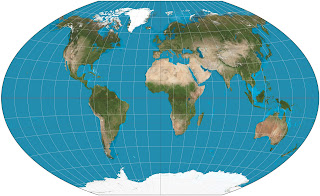 Based on the text alone, the only requirement is that Lehi crossed "large waters" and arrived at a land mass.

Based on the text alone, choosing the "Americas" is as arbitrary as choosing Malaysia or Eritrea or anywhere else on the planet.

To discover the location of Book of Mormon events, we have to look outside the text for more information.
_____ 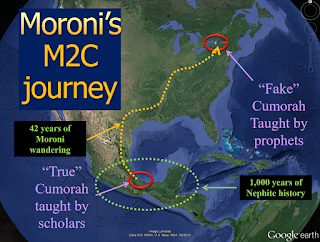 Some M2C scholars claim Moroni had to live in the Americas because he hid the abridged plates in the hill in western New York.

They say he could have easily carried the plates from Mesoamerica to New York.

By the same reasoning, Moroni could have carried the plates from Japan, Australia, or Italy. He just needed a boat to cross the same way Lehi did.
_____

Solely because Joseph Smith and Oliver Cowdery said it was. They reported what Moroni told Joseph and what they learned from their own experience. This includes both the American setting of the Book of Mormon and the location of Cumorah in New York.

Everyone else relied on what Joseph and Oliver taught.
_____

Do you see the problem for M2C scholars, their employees and followers?

The sources they rely on to claim the Book of Mormon events took place in the Americas also taught that the Hill Cumorah of Mormon 6:6 was in New York.

There's nothing logical about this. It's pure bias confirmation.

Ask any M2C believer why they are looking in Mesoamerica. They'll give you lots of rhetoric about north-flowing rivers, the "narrow neck of land," various "correspondences" with the extensive Mayan civilization, and, sooner or later, they'll throw in some teachings from the prophets about America. They'll probably tell you Joseph Smith wrote about Mesoamerica in the 1842 Times and Seasons.

What they won't tell you is that ultimately, the source of authority for America as the setting for the Book of Mormon boils down to Joseph Smith and Oliver Cowdery, who both also taught that the "hill in New York" is Cumorah.

This is the same irrational approach taken by the people who support SITH by quoting Emma Smith's so-called "Last Testimony" or David Whitmer's various statements. They accept the SITH material but they outright reject the rest of what Emma and David had to say.

To promote both SITH and M2C, our intellectuals simply reject what Joseph and Oliver taught in favor of their own private theories.
_____

But there are also many faithful members who still believe the teachings of the prophets about Cumorah, the Urim and Thummim, etc.

Because our intellectuals mostly favor M2C and SITH, their citation cartels exclude those Church members who still believe the teachings of the prophets on these issues.

But maybe that will change someday. Especially as more and more Church members learn enough to make informed decisions.