Books to Read - Vision in a Seer Stone 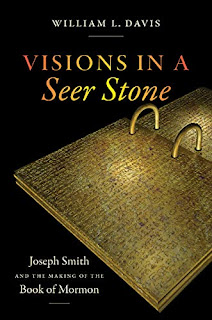 This probably isn't a book for everyone, but it is unusually insightful. I recommend it to those who want to understand the context of the Book of Mormon in terms of Joseph Smith's environment.

The book happens to fit in with a project I'm working on that I'll discuss more in a few weeks.

I'll discuss another aspect of this book it tomorrow.
_____

The publisher's page lets you read some of the book.

A panel of reviewers have posted comments here.

Rather than write my own review, I'll post part of the review by Michael Austin, from the above citation.


Visions in a Seer Stone and the Way Forward for Book of Mormon Studies
Reviewed by Michael Austin
William L. Davis, the author of Visions in a Seer Stone, holds a Ph.D. in Theatre and Performance Studies from the University of California at Los Angeles. The discipline is important; it gives Davis a set of academic lenses that nobody has ever used before in studying the Book of Mormon. And by applying these lenses to the text rigorously, Davis pulls off something that I would not have considered possible before reading the book. He makes an utterly uncontroversial observation about the Book of Mormon’s origin and uses it to support a series of insightful, original claims about the way that the Book of Mormon can and should be read.
The book’s central observation is that Joseph Smith did not write the original text of the Book of Mormon; he spoke it, and other people wrote it down. LDS children learn this in Primary, and both devout believers and strident critics accept it as historical fact. We know that  Joseph dictated the text of the Book of Mormon to Oliver Cowdry and several other scribes and that Cowdery created a second manuscript for the printer, who copyedited it, divided it into paragraphs, and typeset it to produce the 1830 edition of the Book of Mormon. Over the last 30 years, Latter-day Saint scholars led by BYU Professor Royal Skousen have painstakingly reconstructed and compared these original manuscripts to create an invaluable resource, The Book of  Mormon: The Earliest Text. Davis’s simple observation, though, reminds us that this is not quite the correct title. The earliest text of the Book of Mormon is not a manuscript at all, but an oral performance for an audience of one.