There are a few more things about Producing Ancient Scripture to consider.

There is a clear trend among LDS scholars to redefine the word "translation." They don't think Joseph translated anything, at least not in the ordinary sense of the word.

This book offers several variations on that theme.

One scholar who didn't contribute to this book has described the Book of Mormon as Joseph's "greatest revelation." We will undoubtedly hear more of this in the future. 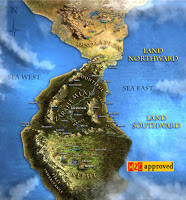 Thanks to the academic cycle in the Church (CES and BYU), we have younger generations who disbelieve in the historicity of the Book of Mormon. This was easily predictable once they started teaching the Book of Mormon with a fantasy map.

M2C was bad enough. But at least it was grounded in the real world. At least M2C promoters, their employees and followers still believe that the Book of Mormon describes real people in a real place and time. Their claims may not be credible to most people, but (so far) they have not given up on historicity.

I realize that CES and BYU teachers who use these fantasy maps also claim they believe the Book of Mormon relates actual history about actual people. But can anyone imagine teaching World War II by referencing a fantasy map that has no correlation to anyplace on the actual planet? Or teaching the Bible from such a fantasy map?

Our scholars continue to lay the groundwork for an approach to the Book of Mormon that frames it as pure revelation to Joseph Smith that is more in the nature of a parable than of an authentic history.

Producing Ancient Scripture is another nudge in that direction.
_____

There is undoubtedly a lot of value in academic analysis and even speculation, but there seems to be no interest in exploring the traditional narratives. Everyone has jettisoned those to focus on the more exciting SITH, M2C, JDT and MUST narratives.

Sam Brown's chapter in the book, titled "Seeing the Voice of God," says "Whatever was happening to Smith subjectively, objectively he was dictating a text while looking into a hat containing a special stone."

It seems that all of the LDS scholars have embraced SITH wholesale, without critical analysis. Brown goes on to say that there is "textual evidence suggesting that Smith was not reading words in the darkness of his hat." He points out that "Skousen has clearly demonstrated that the scribes were not reading a source text. He has missed, however, evidence suggesting that no one was reading a source text for the Book of Mormon. A handful of verbal false starts and missteps, along with their associated corrections, suggest that the Book of Mormon was primarily an oral production."

This is similar to a claim made by another book we'll consider tomorrow, Visions in a Seer Stone. The gist of the argument is that Joseph gave voice to a visionary experience.

What no one seems to consider any longer is the possibility that Joseph actually translated the plates. Anyone who has translated knows that you often have different ways of expressing things. You always have false starts and missteps. If you try dictating a translation, you always say something such as "or, in other words." You might do it to clarify a meaning or to correct a mistake. That's what we would expect from a translation.

Joseph Smith was not particularly forthcoming about how he translated ancient scripture. In the original preface to the Book of Mormon, he said only that it was done "by the gift and power of God." The few glimpses of the translating process do not describe him looking at the plates.... He apparently did not know or even claim to know the language on the plates.... Smith copied some of the script but did not create a lexicon to explain the meaning of the characters."

Those statements fit the current narrative, but are they accurate?

In the preface, Joseph explicitly said he "took" the translation "from the Book of Lehi." He didn't say he saw a vision or read words off a stone in a hat. There are multiple accounts of Joseph looking at the plates with the Urim and Thummim. He not only copied the script but translated the characters, the first step in any translation process. If he did not know the language, how could he claim the Title Page was a literal translation?

When I read books such as Producing Ancient Scripture, I see an abundance of bias confirmation, omission of contrary evidence, and contributions to Groupthink, all with the objective of distancing the Book of Mormon to any actual translation on Joseph's part.

There is some room for the translation narrative, fortunately. Grant Hardy wrote a chapter titled "Ancient History and modern Commandments: the Book of Mormon in Comparison with Joseph Smith's Other Revelations." He makes the case that reading the Book of Mormon as a translation has implications that would not apply to alternative approaches. "It is possible to read the book as a work of myth, or as religious fiction written by Joseph Smith, or even as fiction written by God and revealed to Joseph Smith--all of which may be hypotheses worth exploring."

That is couched in the context of considering the book as a translation, but it's a good summary for the overall theme of Producing Ancient Scripture.

He makes SITH claims such as this: "the stone that Smith most frequently used to translate the Book of Mormon is still in the possession of the leaders of the church he founded." This is theory dressed up as fact. Oliver and Joseph always said Joseph translated with the Urim and Thummim that came with the plates--not the seer stone. At best, we can say some people saw Joseph dictate words in Fayette when he looked at a stone in a hat, but so far, I've seen no evidence of anyone saying just what those words were or where they fit into the text. (I think it was part of a demonstration, a topic for another time.)

Then he writes, "Joseph Smith never gave any details about the translation process." This is a theme, apparently. I've previously given examples of how our historians tell us Joseph said only that he translated by the gift and power of God, as they omit (censor) the references to the Urim and Thummim. As I mentioned above, Joseph said he took the translation of the 116 pages from the Book of Lehi. He provided a literal translation of the Title Page. He translated the characters before he began dictating to Martin Harris. All of these describe an actual translation.

Hardy even brings up the anonymous 1842 Times and Seasons articles about Mesoamerica, prefacing it by the Nov. 1841 Bernhisel letter that Joseph didn't write or sign. (It was obviously drafted by Wilford Woodruff, the only person who had read the books by the time that letter was written.)