I put together some graphics to simplify the important concepts about facts and analysis. By applying this model, we can see why LDS apologists are failing. They basically agree with the critics regarding fundamental aspects of the Book of Mormon.

It's no wonder so many Latter-day Saints, former LDS, and prospective LDS, are so confused. When they read or hear LDS scholars agreeing with the critics on such basic points, they are led to inquire themselves. But our LDS scholars have habitually and persistently censored and obfuscated the facts that support the teachings of the prophets, and most people aren't experienced enough to know where to find good information. They end up deferring to the scholars/critics and become confused and disturbed in their faith.

This is all essentially a thinking error that we can rectify once we identify the error.

First, there are objective facts, including historical and scientific, that everyone can agree exist.

For example, an automobile collision occurs. At an intersection, a blue car struck the right side of a green car. Both cars stopped. The blue car is perpendicular to the green car. A police officer with a bodycam shows up and asked a bystander what happened. The bystander says, "The blue car ran the red light." The fact that the bystander made the statement is a fact everyone can agree exists (assuming the bodycam accurately recorded the statement).

Second, we filter the facts with analysis, denial, assumptions, inferences, etc. Analysis includes scrutiny of the reliability and credibility of facts.

For example, the police officer may follow up by asking, "Where you here when it happened?" The bystander might say "No, but a friend of mine was and he told me." The original statement is based on hearsay, not personal observation, and is unreliable.

Or, the bystander might say, "Yes." Then the officer asks, "Tell me what you saw." The bystander says, "I heard the crash and looked up. The light was red." Now we see the bystander was present but didn't actually observe what he claimed was a fact. He made an assumption or inference.

Further investigation could reveal that it was the green car that ran a red light, exactly the opposite of what the bystander stated, even if the bystander thought he was telling the truth.

Critical analysis can be effective at separating truth from untruth, but there are other ways in which people filter facts. They deny facts they don't want to accept. They make assumptions and/or inference based on the facts they do know. They make logical errors, including comparison errors, that lead to erroneous conclusions.

Cross-examination could filter out unreliable testimony, but we can't cross-examine historical figures. That's why we have a third step.

A good example is the way organizations that purport to have contradictory hypotheses actually share the same filter on basic facts. (click to enlarge) 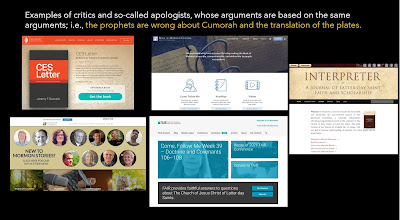 These groups all applied one filter to the facts: the filter that the prophets were wrong. To understand how these groups reached different hypotheses despite sharing the same filter, we can apply a graphical model of the process. 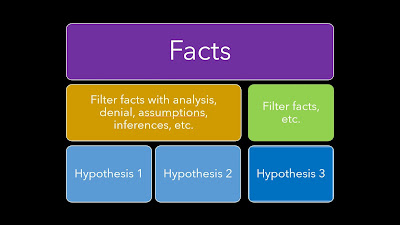 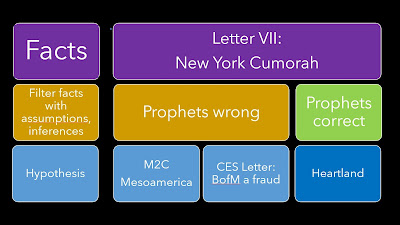 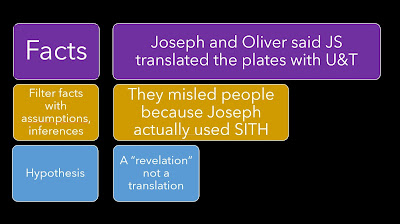 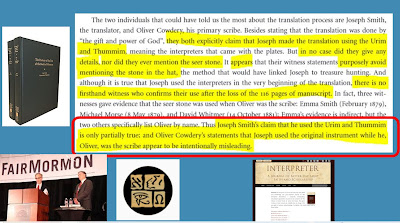 The next time you consider Church history, apply this model and see if you can come up with a solution in the form of a hypothesis that explains more facts.
Posted by jonathan3d at 1:55 PM