I often refer to "multiple working hypotheses." The concept means a variety of interpretations of the same facts. I'm all in favor of different ideas. What I don't favor is censorship, omitting facts, and conflating facts with assumptions, opinion, inferences, hearsay, etc.

People often ask for a good resource that compares the various geographical theories. A few years ago, we agreed in principle with Book of Mormon Central to create an open source comparison, but they reneged on the agreement so nothing was ever done. They still don't want people to consider multiple working hypotheses based on all the facts.

One resource that presents multiple working hypotheses is here: 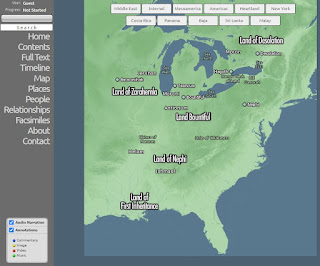 This is one of the best sites I'm aware of for info about the Book of Mormon.

I'm told that Book of Mormon Central acquired the site, which may explain the editorial bias evident throughout. (Yes, I realize that one could argue this site contradicts my claim that BMC doesn't want people to consider multiple working hypotheses, but the site had these maps before BMC acquired it.)

Hover your cursor over "Internal," "Mesoamerica," and "Heartland" and you'll see what I mean about editorial bias.

The "Internal" map is the self-serving Sorenson M2C interpretation of the text, which CES and BYU have adopted when they created their fantasy maps. Predictably, this "internal" map is designed to imprint Mesoamerica on the minds of all who see it.

The "Mesoamerican" map description uses the typical appeal to authority fallacy: "subscribed to by most mainstream LDS scholars at BYU and the Maxwell Institute." In reality, the Maxwell Institute takes no position on the question, there has never been a poll of "mainstream LDS scholars at BYU," many of whom don't accept Mesoamerica, and this appeal to authority boils down to the efforts of a handful of scholars in the M2C citation cartel--including the ones who own this website. Book of Mormon Central insists people must accept M2C to even participate in their efforts to share the Book of Mormon with the world.

That said, there is plenty of evidence to support M2C, provided one first rejects what the prophets have taught about the New York Cumorah. It's a valid "working hypothesis" once you accept the assumptions it relies upon.

And, of course, there are numerous variations among M2C proponents. Such multiple working hypotheses are healthy and productive as we continue to learn more.

The "Heartland" map description frames it as "United States-centric" because one of the favorite M2C criticisms of "Heartland" ideas is the false claim that "Heartland" models are based on patriotism and nationalism. As anyone who actually reads the material knows, the so-called "Heartland" models are based on accepting (instead of repudiating) the New York Cumorah, statements by Joseph Smith and early Church members about what Joseph said, the revelations in the D&C, and relevant extrinsic evidence from archaeology, anthropology, etc.

Within the "Heartland" scenario, there are several variations, as there are within the M2C scenario. Readers here are presumably familiar with my proposal, which I described in Moroni's America. It differs in some respects from the working hypotheses proposed by Wayne May, Rod Meldrum, and others. For example, here's a detailed working hypothesis called the "Zarahemla Centric Heartland Model" that accepts the New York Cumorah but reaches a conclusion different from mine.

Here again, having multiple working hypotheses is healthy and productive.

Everything else flows from there.

So far as I know, no one is claiming any additional revelation about the geography. It's a matter of interpreting and prioritizing evidence.

For example, I've been told many times by M2C proponents that they reject the New York Cumorah because the text requires them to. That's the argument that RLDS scholar Stebbins made over 100 years ago, and M2C believers today have accepted that argument. All the non-New York Cumorah theories take that approach.

There's nothing irrational about that approach. It's the basis for several legitimate working hypotheses.

Like me, though, most people realize that Oliver Cowdery knew the Book of Mormon pretty well, and he didn't think the text contradicted his experience when he visited the depository of Nephite records in the "hill in New York" that, according to the M2C scholars, cannot be Cumorah.

But, as I said, people can reasonably believe that Oliver was wrong, that Lucy Mack Smith falsely reported her experiences, that Joseph eventually adopted a false tradition about Cumorah, etc.

Soon I'll post Stebbins' argument, which the M2C proponents have mimicked ever since. See what you think.