John Dehlin and the rest of the M2C/SITH citation cartel

I've mentioned a few times that I'm working on a book on LDS apologetics. The topic came to the forefront recently with articles published in the Salt Lake Tribune that I'll mention below.

This is a good time to reiterate the observation that the M2C/SITH citation cartel includes not only the Interpreter, Book of Mormon Central, FAIRLDS, and Meridian Magazine, but also Mormon Stories and the CES Letter. All of these groups and their principals share the theme that the prophets were wrong about the New York Cumorah, and all of them agree that Joseph Smith didn't really translate the plates. 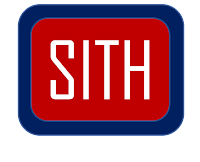 Royal Skousen, the retired BYU professor and the premier scholar on the physical texts of the Book of Mormon, expressed the basic idea in the pages of the Interpreter: “Joseph Smith’s claim that he used the Urim and Thummim is only partially true; and Oliver Cowdery’s statements that Joseph used the original instrument while he, Oliver, was the scribe appear to be intentionally misleading.”

Fortunately, the ranks of these citation cartels is shrinking.

The Maxwell Institute and BYU Studies used to be part of the cartels, but the Maxwell Institute jettisoned the M2C logo along with its previous M2C advocacy. Steve Harper, the new editor at BYU Studies, appears to have jettisoned the obsessive M2C advocacy that his predecessor, Jack Welch, conducted for years. Well, BYU Studies still features the M2C maps, but at least the editorial content in recent issues is a little more balanced and inclusive now than it has been in decades.

Unfortunately, though, the remaining six are moving full steam ahead. They're all prospering, raising more money, expanding their social media influence, and telling everyone who will listen about their successes (as they define them).

For example, 3 weeks ago MormonStories, which has 55.2k subscribers, released a short video featuring SITH that has accumulated 386,000 views so far. The response from FAIRLDS and the rest of the cartel is to (i) concede that Joseph actually used SITH to produce the Book of Mormon, and (ii) ludicrously claim that was always taught in the Church.

An alternative response that the SITH cartel never considers is that Joseph actually did translate the plates, as he and Oliver claimed. In my view, the historical and linguistic evidence corroborates what Joseph and Oliver said. That's not to say there were no SITH witnesses, but as I've discussed at length elsewhere, these witnesses conflated their observations with their assumptions and inferences, and they were motivated by trying to refute the Spalding theory.

As with M2C, the SITH citation cartel seeks to repudiate the teachings of the prophets instead of corroborating those teachings. This is easy to understand when done by MormonStories and CES Letter, but it's appalling when done by FAIRLDS, Book of Mormon Central, the Interpreter, and Meridian Magazine, each of which portrays itself as promoting faith.

Yesterday the Salt Lake Tribune published a couple of articles about John Dehlin and his MormonStories podcast.

This excerpt pretty well summarizes what I've observed as well: “People are raw emotionally and lost in a lot of ways, with their worldview flipped upside down,” said Ethan Gregory Dodge, co-founder of the Truth & Transparency Foundation (formerly MormonLeaks). “He comes across as someone who has all the answers and then starts asking for money. People will give John money out of gratitude, but eventually fall out of love with him.”

His “business model thrives on drama,” Dodge said. “The more drama he can drum up, the more podcast downloads and YouTube hits he will get.”

‘Mormon Stories’ podcaster John Dehlin makes $236K a year from his nonprofit. Is that too much? (sltrib.com)

In a sense, Dehlin has an easy job. He just has to point people who have a faith crisis to the writings of LDS scholars in the citation cartels who have repudiated the teachings of the prophets. Then he asks, if Joseph and Oliver were wrong about the translation and historicity of the Book of Mormon, what's left?

Today the Trib published another article.

THRIVE’s aim: Help Latter-day Saints when their ‘shelf breaks’ and they want out of the church (sltrib.com)

As Dehlin and others have observed, problems with Church history and Book of Mormon historicity are among the main issues people have put on their "shelf." When we get answers from LDS apologists that basically agree with the critics, particularly regarding SITH and M2C, it's not surprising that people feel their shelves have broken.

I've discussed Mormon Stories on one of my blogs: https://mormonstoriesreviewed.blogspot.com/

Book of Mormon Central spends millions of dollars annually to promote its agendas. One of its main initiatives is its youtube channel, with its M2C logo, that has 149k subscribers. Its most popular video so far is the Tyler and Taylor show's Come Follow Me episode on Moses 1, released 2 months ago, that has 326k views.
Tyler and Taylor are awesome, great guys, faithful Latter-day Saints, etc. As professionals, they are effective at teaching and persuading.
If they didn't teach M2C and SITH, they'd be even more effective. 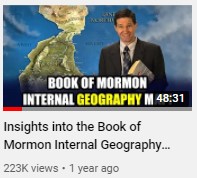 Their M2C video that explicitly promotes M2C was released a year ago. It has 223,000 views.
The obvious problem with Book of Mormon Central is two-fold. They are preaching to the choir, basically raising and spending millions of dollars to entertain the Latter-day Saints, while we observe declining growth of the Church and expanding popularity and influence of critics such as Mormon Stories and CES Letter.
The second problem is they are subverting the whole point of Come Follow Me.
In a recent stake conference, our visiting authorities asked us to emphasize personal study and reflection instead of merely watching these professionally produced Come Follow Me videos.
In a world saturated with social media, videos and games, the illusion of learning is pervasive. People can watch Tyler and Taylor and think they've really learned something, but the point of Come Follow Me is not entertainment. The program seeks to motivate the Latter-day Saints to study the scriptures and implement the principles.
We all know the problems with the other members of the citation cartels, including the CES Letter, the Interpreter and FAIRLDS, so no need to rehash them here.
_____
One last thought.
Primary classes have long taught the parable of the sandy foundation vs. the foundation of rock.
The scriptures and the teachings of the prophets are the rock.
The speculations of scholars and critics, including SITH and M2C, are the sand. 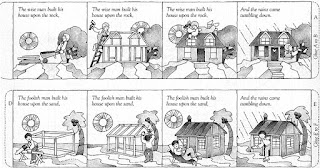 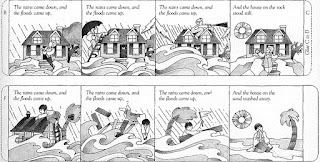