Impossible to change an academic's mind

Many Latter-day Saints are perplexed at the way Book of Mormon Central continues to spend millions of dollars to try to persuade them that the prophets were wrong about Cumorah, the translation of the Book of Mormon, and other issues.
The rest of the citation cartel, including the Interpreter, FAIRLDS, and other LDS intellectuals, spend less money but seek the same outcome.
Once we realize that these intellectuals are deeply invested in M2C, SITH, etc., their activities make sense. They've been teaching and promoting M2C and SITH to BYU students and other Latter-day Saints for many years. They've embedded M2C in their logo.

They can hardly change course now.
They are so deeply invested they don't even want the Latter-day Saints to know what the prophets have taught, let alone learn about the evidence that corroborates those teachings.
_____
A citation in a recent tweet explains that "highly educated people have larger stores of information from which to selectively search for information supporting a desired belief. Thus, it is nearly impossible to change an academic's mind about anything important, particularly in his own field of study."
This problem is epitomized by the "Kno-Whys" (which in many cases are "no=wise") articles from Book of Mormon Central, particularly those that try to rationalize repudiating the teachings of the prophets.
From the tweet:
"high intelligence may worsen prospects for obtaining a true belief...a biased person uses intelligence and education as tools for rationalizing beliefs...highly educated people have larger stores of information to search to support a desired belief"
https://rintintin.colorado.edu/~vancecd/phil3600/Huemer1.pdf 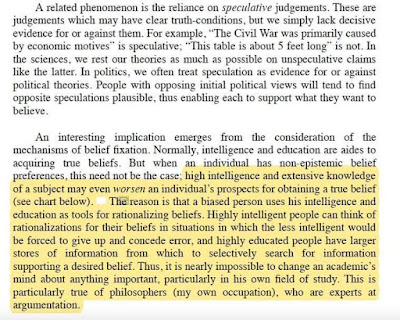