A few years ago I discussed how paradigms shift.

In this post, we'll look at the tipping point for SITH (the stone-in-the-hat theory).

Some people wonder why I discuss SITH on this page which originated as a discussion about M2C (the Mesoamerican/two-Cumorahs theory). One reason is that both theories share the claim that Joseph and Oliver were unreliable speculators who misled the Church. M2C teaches that Joseph and Oliver misled everyone about Cumorah. SITH teaches that they misled everyone about the translation.

I think both Joseph and Oliver told the unvarnished truth, so I discuss the two topics together.

From time to time I hear from people I've known for decades, who have been faithful Latter-day Saints the whole time, but who are troubled by SITH. Everyone who knows what Joseph Smith and Oliver Cowdery taught can easily see how SITH contradicts their teachings.

Despite the current trend toward accepting SITH, many Church members still believe what Joseph and Oliver taught instead. It's difficult to tell whether we are near, at, or past the tipping point.
Since 1834, critics have tried, unsuccessfully, to establish SITH as the "actual" history of the translation of the Book of Mormon.

SITH was spelled out in the 1834 book Mormonism Unvailed., published by E.D. Howe based on material provide by Doctor Philastes Hurlburt. You can read the excerpt (with the link) here:

If you read that excerpt, you'll see how it is essentially the same claim made by leading LDS historians and intellectuals.

Social media critics of the Restoration are having some success on social media. For example, here's a recent post from Twitter (with the link and author removed). 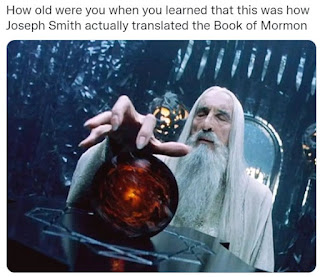 As the graphic claims, critics commonly promote the narrative that "Joseph Smith actually translated the Book of Mormon" with SITH.

Then the critics claim Church leaders "lied" about the translation, thereby undermining faith in both the Book of Mormon and in the teachings of Church leaders.

It's common now for people to ask when they first learned about SITH. Those familiar with Church history know that SITH has been floated all along.

But they also know that the SITH narrative did not prevail in the days of Joseph Smith.

In fact, Joseph discussed the authors of Mormonism Unvailed in the pages of the Elders' Journal.

This is the Hurlburt that was author of a book [Mormonism Unvailed] which bears the name of E. [Edward] D. Howe, but it was this said Hurlburt that was the author of it. But after the affair of Hurlburt’s wife and the pious old deacon, the persecutors thought it better to put some other name as author to their book than Hurlburt, so E. D. Howe substituted his name. The change however was not much better. Asahel Howe, one of E. D.’s brothers who was said to be the likeliest of the family, served apprenticeship in the work house in Ohio for robbing the post office. And yet notwithstanding all this, all the pious priests of all denominations were found following in the wake of these mortals.

Hurlburt and the Howes are among the basest of mankind, and known to be such and yet the priests and their coadjutors hail them as their best friends and publish their lies, speaking of them in the highest terms. And after all this, they want us to say that they are pious souls and good saints. Can we believe it? Surely men of common sense will not ask us to do it.

Good men love to associate with good men, and bad men with bad ones, and when we see men making friends with drunkards, thieves, liars, and swindlers, shall we call them saints? If we were to do it, we might be justly charged with “partaking of their evil deeds.”

______________
When we read what Joseph Smith had to say about them, we wonder why our modern LDS scholars and intellectuals defer to Hurlburt and Howe.