Yet another SITH video! 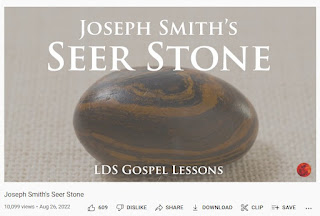 https://www.youtube.com/watch?v=amGVHecmPA0&t=29s
Anonymous channels, like anonymous blogs, are awesome because we never know if they are sincere or "false flags," and this is no different. (This explains why one of my main critics remains anonymous.)
If E.D. Howe was alive today, he'd be releasing videos such as this instead of republishing Mormonism Unvailed to promote SITH.
But we'll assume the channel, which purports to come from a faithful Primary teacher, is sincere.
As such, it's even more alarming than a false flag because it reflects how deeply SITH has insinuated itself into the worldview of modern Latter-day Saints.
The video never once quotes or cites what Joseph Smith and Oliver Cowdery said about the translation of the Book of Mormon. [See http://www.lettervii.com/p/translation-references.html]
It's easy to assume the creator doesn't even know what they said, because their teachings have been deliberately omitted from the Gospel Topics Essay, the Saints book (vol. 1), and other modern references.
I hear from more and more Church members who treat these references as scripture. And, to be sure, non-English speaking Latter-day Saints don't have feasible access to what Joseph and Oliver taught because their teachings are available mainly in English (the Joseph Smith Papers and other original sources).
The omission (suppression?) of what Joseph and Oliver taught is an ongoing tragedy that could be easily remedied with a few edits to correct the oversight.
_____
Let's look at the video. Original in blue, my comments in red.

This is another ridiculous attempt to promote SITH (the stone-in-the-hat theory) while ignoring what Joseph Smith and Oliver Cowdery said. Regarding the Urim and Thummim, this video claims at 3:50, "this is in fact not how the process worked at all as many of us now know." What this video "knows" was promoted back in 1834 in the anti-Mormon book Mormonism Unvailed. Joseph and Oliver refuted SITH multiple times, but now LDS intellectuals and critics alike have revived it. Ignore them and stick with what Joseph and Oliver said.

At 5:47, the video says, "it isn't clear whether he [Moroni] also returned the Urim and Thummim or not." But it's crystal clear if you care what Joseph and Oliver said.

At 6:11, the video says, "in other words joseph smith used the Urim and Thummim given him by moroni to translate the 116 pages that are now lost and the rest of the book of mormon the entire book of mormon that you have and you've read your entire life was not translated using the urim and thummim but rather this other seer stone it can be confusing because even joseph referred to these and other stones all as Urim and Thummim or seer stones interchangeably.

He did no such thing and no one has found such a claim. Instead, responding to this ridiculous SITH narrative, Joseph emphasized that he translated the record by means of the Urim and Thummim that came with the plates!

At 12:08, the video relates a theory as a fact, the same way David Whitmer and the other SITH witnesses did.

This is an excellent example of the way historians have simply adopted what the SITH witnesses said while ignoring their competency, availability, and motives, not to mention the context of the SITH statements (i.e., they were trying to refute the Spalding theory). If some future historian comes across this video, it will become yet another SITH “witness” even though the video is simply repeating hearsay while stating it as a fact.

Next, at 12:22, the video says "it isn't a traditional translation because joseph didn't know both reformed egyptian and english and looked at the characters and determined the right words and phrases in english."

Except the video forgot to mention JS-H:

immediately after my arrival there [in Harmony, Pennsylvania] I commenced copying the characters off the plates. I copied a considerable number of them, and by means of the Urim and Thummim I translated some of them, which I did between the time I arrived at the house of my wife’s father, in the month of December, and the February following.

12:42 for those who don't like that this is the process used

12:48 look at second nephi 27:20 which is nephi giving isaiah 29 so this is really isaiah speaking of the coming forth of the book of mormon it says quote “then shall the lord god say unto him the learned shall not read them for they have rejected them and i am able to do my own work wherefore thou shalt read the words which i shall give unto thee.”

13:10 he didn't say he would give him the ability to translate languages or have the scholarly education to translate an ancient record he said that joseph would read the words god would give unto him and that is exactly what happened

While this is a common justification for SITH, the SITH sayers take this verse out of context. When read in context, the passage obviously refers to the engravings on the plates, which Joseph said he studied and translated. These are the words God gave to Joseph to read and translate into English.

14 Wherefore, the Lord God will proceed to bring forth the words of the book; and in the mouth of as many witnesses as seemeth him good will he establish his word; and wo be unto him that rejecteth the word of God!

15 But behold, it shall come to pass that the Lord God shall say unto him to whom he shall deliver the book: Take these words which are not sealed and deliver them to another, that he may show them unto the learned, saying: Read this, I pray thee. And the learned shall say: Bring hither the book, and I will read them.

16 And now, because of the glory of the world and to get gain will they say this, and not for the glory of God.

17 And the man shall say: I cannot bring the book, for it is sealed.

18 Then shall the learned say: I cannot read it.

20 Then shall the Lord God say unto him: The learned shall not read them, for they have rejected them, and I am able to do mine own work; wherefore thou shalt read the words which I shall give unto thee.

21 Touch not the things which are sealed, for I will bring them forth in mine own due time; for I will show unto the children of men that I am able to do mine own work.

22 Wherefore, when thou hast read the words which I have commanded thee, and obtained the witnesses which I have promised unto thee, then shalt thou seal up the book again, and hide it up unto me, that I may preserve the words which thou hast not read, until I shall see fit in mine own wisdom to reveal all things unto the children of men.

Next, the video relates some speculation.

Based on what Joseph and Oliver said, we can know 100% that Joseph needed the plates because he was translating the engravings on the plates.

13:40 but it does seem to me that there needs to be a reference object or something there for the transliteration process to work when moroni took the plates he still had the brown stone but he couldn't transliterate

This is commonly referred to as the talisman or ____ theory. I assume everyone can see the logical fallacy here, as well as the factual fallacy. The video assumes Joseph did not possess the Urim and Thummim after he lost the 116 pages, which is what David Whitmer said, even though that contradicts what Joseph, Oliver, and Lucy Mack Smith reported.

14:01 shortly after the process of transliteration of the book of Mormon was complete he gave the genesis [the video claims the brown stone relates to the timing of the creation of the Earth] seer stone to oliver cowdery while some wonder if the white stone was used rather than this genesis stone and perhaps it was the fact that joseph gives the stone to oliver who was the translator for all of the that portion of the book of Mormon that the seer stone was used for it seems to indicate that it was the brown stone

There’s a lot of thinking past the sale here. Debating which “seer stone” Joseph used leads people to simply assume that Joseph used a seer stone instead of the Urim and Thummim to translate the plates. If (as I propose) Joseph used the brown stone purely for demonstration purposes, he naturally would have given it to Oliver because he didn’t need it any longer.

Recall that when Oliver rejoined the Church and reiterated his testimony that Joseph translated the plates with the Urim and Thummim, he possessed this brown seer stone but didn’t display it or even mention it. This has led some LDS scholars to surmise that Oliver deliberately misled everyone, but in my view, they have that backwards. Oliver sought to correct the SITH rumors by reiterating what he and Joseph had always said.

16:11 in summary i think the seer stones are super cool between history scripture and the pure awesomeness factor i don't know why anybody finds the use of special stones to be strange or weird it all seems directly in line with how things have always been and always will be

Yes, more and more Latter-day Saints are reframing SITH as a feature, not a bug.

The SITH narrative shows us that E.D. Howe (and Hurlburt, his source) knew what he was doing when he described SITH in Mormonism Unvailed.

Let’s not forget that Joseph knew what he was doing when he refuted SITH and said “Hurlburt and the Howes are among the basest of mankind, and known to be such and yet the priests and their coadjutors hail them as their best friends and publish their lies, speaking of them in the highest terms.”

Now, in our day, it is our own LDS scholars who are publishing the Hurlburt/Howe lies.

To repeat, this video is another ridiculous effort to mainstream SITH (the stone-in-the-hat theory). SITH was set out in the 1834 anti-Mormon book Mormonism Unvailed. Joseph and Oliver refuted it multiple times by explaining that Joseph translated the record by means of the Urim and Thummim that came with the plates. This video ignores what Joseph and Oliver said in favor of SITH sayers who repeated the Mormonism Unvailed narrative. It's easy to promote SITH when you ignore what Joseph and Oliver said, but it's impossible to promote SITH when you accept what they said.