The tragedy of Book of Mormon Central, part 1

This week we're going to discuss Book of Mormon Central in more detail.

When people ask me what I think about Book of Mormon Central (BMC), I observe that I personally like and respect everyone associated with the organization. I assume they're all faithful Latter-day Saints with good intentions. But we all know the destination of the road paved with good intentions.
BMC is an advocacy group for the personal opinions of its principals instead of a legitimate academic organization.
As established by their very logo, the principals at BMC are determined to establish the Mesoamerican/two-Cumorahs theory (M2C) by spending millions of dollars promoting M2C. They mislead their donors and readers by claiming to follow the Church's policy of neutrality, when in practice they promote M2C exclusively.
On their Spanish-language cite, they are more explicit than they are on their English site.
https://www.bookofmormoncentralamerica.com/2021/11/bmc-in-spanish-vs-english.html
The principals at BMC refuse to acknowledge, let alone explain, faithful perspectives other than M2C.
By focusing on M2C as the only permissible interpretation of the Book of Mormon and its historicity, they not only oppose the Church's position of neutrality on the topic, but they undermine faith in the Book of Mormon, as well as the teachings of the prophets, regarding the hill Cumorah.
_____
Those Latter-day Saints who still believe the teachings of the prophets about Cumorah don't mind that others choose to believe M2C (or one of the other "two-Cumorahs" theories). We can all serve and love one another regardless of what we believe about these issues. We're happy for a diversity of views among faithful Latter-day Saints and we encourage everyone to learn as much as they can about the topic so we can all make informed decisions. 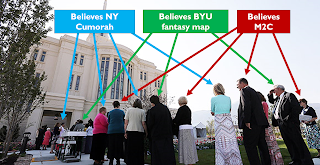 It's sad.
It's inappropriate.
It's amazing that anyone with an ounce of intellectual honesty would even work for Book of Mormon Central, let alone support the organization as currently constituted.
And we'll discuss the implications in upcoming posts.
Posted by jonathan3d at 12:18 PM