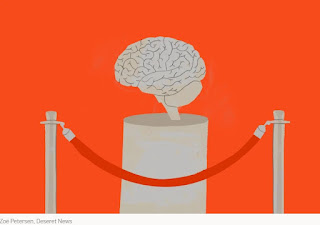 An outstanding article in the Deseret News explains the concept of "cognitive rigidity."

Cognitive rigidity is the foundation of the LDS citation cartel based on M2C and SITH.

We continue to encourage Book of Mormon Central, the Interpreter, and FAIRLDS to provide their readers and viewers with access to all the facts, along with multiple faithful interpretations--including alternatives to M2C and SITH.

But we recognize that, so far, Jack Welch, Dan Peterson, and Scott Gordon adamantly refuse to do so.

They're all awesome people, faithful and smart, etc. But along with the organizations they lead, those three in particular exemplify the problem of cognitive rigidity, joined by their employees, collaborators, and followers, .

On this blog we've discussed the ways in which these three men, specifically, have sought to promote M2C and SITH by misrepresenting Church history, making up false information about the Heartland ideas, and refusing to permit alternative faithful interpretations on their websites.

Think of how useful it would be for Latter-day Saints and their friends to have a comprehensive, accessible comparison analysis of the various faithful interpretations of Church history and related topics.

Instead, the citation cartel adheres to and enforces the personal beliefs of Jack Welch, Dan Peterson, and Scott Gordon.

Cognitive rigidity is the inability to mentally adapt or change. Its opposite is cognitive flexibility, the ability to consider different perspectives and opinions and in doing so, become a better person.

Cognitive rigidity is supported by confirmation bias, which drives us to seek out information that supports our established positions. We return, over and over, to the same websites, podcasts and publications, and to people who speak our language...

Not only does cognitive rigidity harm us, but it also harms others, and it can cause destruction to the broader community.

Cognitive flexibility is what is needed in a democracy. It is, however, difficult to achieve. It takes an abundance of time and a tremendous amount of effort. It requires a disciplined mind grounded in a growth mindset instead of a fixed one. It takes self-mastery and self-control to authentically hear other views on the opposite side of what we think and value.

Cognitive flexibility is also difficult because it often creates cognitive dissonance, the state of having inconsistent thoughts, beliefs or attitudes, especially regarding behavioral decisions and attitude change.

Marc Andreessen
@pmarca
·
1h
A side effect of banning speech you don't like is that you lose touch with reality yourself. Your own thinking is no longer subject to stress-testing. You can spiral straight into insanity.
Posted by jonathan3d at 8:00 AM