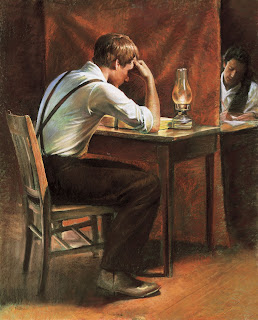 There is a lot of unnecessary confusion about the translation of the Book of Mormon.
Joseph explained that he had a key:

I have a key by which I understand the scriptures. I enquire what was the question which drew out the answer from Jesus, or caused Jesus to utter the parable...
To ascertain its meaning we must dig up the root, & ascertain who it was that drew the saying out of Jesus.

the Book of Mormon had come forth as an “ensign to the nations,” containing an account of the gospel in much plainness, being translated by the gift and power of God by the use of the Urim and Thummim, that had come forth with the plates that contain the record.

https://www.josephsmithpapers.org/paper-summary/times-and-seasons-1-september-1842/6
For whatever reasons, many modern LDS scholars/historians now claim that Joseph Smith did not use the Nephite interpreters or the plates to produce the Book of Mormon. Acknowledging what Joseph and Oliver claimed, they rationalize that the term "Urim and Thummim" referred to both the interpreters and the seer stone he found in a well.
Not even the SITH-sayers at the Interpreter, Book of Mormon Central, or FAIRLDS claim that the stone in the hat (SITH), which Joseph found while digging a well years before he obtained the plates, "had come forth with the plates."
Posted by jonathan3d at 7:00 AM