Instead of using a Mayan glyph, I'd like to see the Maxwell Institute use one of the characters on the Anthon transcript.

Joseph apparently made several copies of the characters from the plates, possibly by placing a sheet of paper on the plates and rubbing it with charcoal, and then having someone trace the impressions. Both Emma and her brother Reuben assisted, as well as Martin Harris. A copy of the characters published in The Prophet, the New York-based LDS newspaper, in 1844 has some variations from the more commonly depicted version, corroborating the claim that there were multiple copies. (See Chapters 2-3, From Darkness unto Light by Michael Hubbard McKay and Gerrit J. Dirkmaat.)

Martin Harris took a copy of the characters to Luther Bradish, who referred him to Drs. Anthon and Mitchill in New York City. They were both interested in Native American Indian stories. Mitchill had learned Mohawk language and remained interested in the origins of the Indians, relying on Humboldt's theory of three separate sources of Indians. Anthon was collecting Indian stories about the time when Harris visited him, so of course he was interested to see what Harris had to say.

A lot has been written about these events and the characters. Harris came away convinced that Joseph was telling the truth. He mortgaged his farm to get the Book of Mormon published.

By contrast, Anthon claimed years later that he told Harris he was being deceived, that the characters were like a Mayan calendar or arranged in a column. In my view, Anthon was trying to separate himself from the matter, had no specific recollection of what Harris showed him, and is therefore less credible than Harris, to whom this had become a major factor in a life-changing decision.

Dean Jessee and others think the word "Caractors" written at the top is in the handwriting of Joseph Smith. Whether that means he personally wrote the characters or was just labeling the ones written by his wife, her brother, or Martin Harris, no one knows. Apparently Martin Harris kept a copy with him for years as evidence of the veracity of the Book of Mormon. Oliver Cowdery gave a copy to David Whitmer, which ultimately ended up at the Community of Christ.

Here are two views on all this history:

Anthon_transcript_1.jpg ‎(422 × 200 pixels, file size: 17 KB, MIME type: image/jpeg)
Original in Library Archives, Reorganized Church of Jesus Christ of Latter Day Saints, The Auditorium, Independence, Missouri.
The obvious question is, what are these characters?
There are numerous theories, but they seem to boil down to three options: some type of "reformed Egyptian" derived from hieroglyphics; some type of writing similar to what is found in Mesoamerica; and some form of writing that Native American Indians in the northeastern U.S. used.
___________________________________________________________
I don't know enough about Egyptian hieroglyphics to comment on that, but it seems to me the experts would already have published some kind of detailed analysis if that theory had a factual basis.
___________________________________________________________
FairMormon predictably links them to Mesoamerica, completely misrepresenting the source they rely on. Below is the quotation from FairMormon, followed by an illustration of the characters they're referring to, and then the original Jones article that FairMormon incorrectly paraphrased. Take a look and see what comparisons you can make between the Tlatilco cylinder and the Anthon transcript.
Characters in the authentic Anthon transcript(s) have been reported on two "Mexican seals made of baked clay" dating from no later than 400 B.C. Non-LDS archaeologists have remarked on this "hitherto unknown writing system" which "closely resemble various oriental scripts ranging from Burma and China to the rim of the Mediterranean," which if authentic "would almost surely be...an instance of transpacific contact during the Preclassic [pre-A.D. 400]." Other examples of the same script may also have been found between 1921 and 1932.[3] This is currently an area requiring more research.

This cylinder was found at Tlatilco in the Valley of Mexico. Of the 28 characters identifiable on this cylinder, 26 have been shown to have a close relationship to Anthon characters.

Here is the Jones article making the comparison: http://www.shields-research.org/General/SEHA/SEHA_Newsletter_122-2.PDF

By contrast, the comparisons between the characters and the writing of the Mikmaq Indians of northeastern U.S. and Canada seem a closer fit. I suspect this comparison may account for whatever positive impression Mitchill and Anthon left with Harris. Of course, the last thing the Mesoamericanists want is a connection between the Anthon transcript and Native American Indian languages. This means we'll never see an article making this connection in the pages of the Interpreter, the Maxwell Institute, BYU Studies, etc., but we always have the Internet where people can make these comparisons and discuss them.

I haven't studied this enough to have a strong opinion--the only ancient languages I've studied are Latin and Greek--but to me, the Mesoamerican connection is very far-fetched, while the connection with the Mi'kmaq is undeniable. I know there are lots of reasons to question the antiquity of the Mi'kmaq characters, 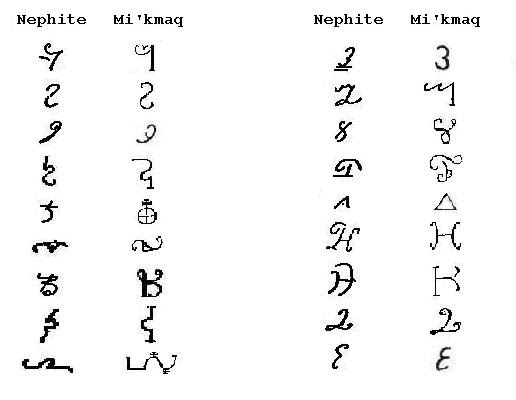 The above Nephite symbols come from the “Caractors” transcript (early Mormon transcript of characters copied from the Book of Mormon Plates). Care has been taken to avoid any comparisons that draws from Mark Hofmann’s “Anthon Transcript” forgery.
Though the spoken language of the Mi’kmaq people of northern  is certainly not the same as Nephite, the style of Nephite writing resembles Mi’kmaq hieroglyphs. In both Nephite and Mi’kmaq, symbols represent entire words. This explains why Nephite “reformed Egyptian” is even more compressed than Nephite “Hebrew”. (Mormon 9:33)
Another version: