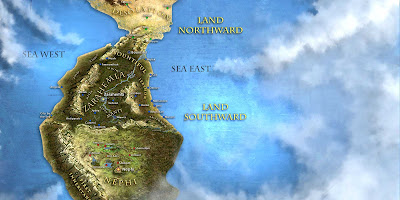 I've commented on the futility of abstract maps before, but a new one has appeared that prompts me to revisit the topic.

I actually like this one a lot. It is well executed, with good coloring and detail. I'm not criticizing the people who put this map together, and I'm not criticizing those who published it, because I think they are well-intentioned and I like the map because it is at least ambiguous (i.e., there is no actual place on Earth that looks like this).

Plus, they cited Moroni's America in the footnotes.

However, I think it's a mistake to create an abstract map of the Book of Mormon in the first place, because the process requires a series of assumptions not required by the text, and the mere creation of the map transforms a theory into an artificial reality. Images such as this create their own reality in the mind of the viewer, and it becomes difficult to dislodge the image while reading the text. For example, this abstract map essentially codifies an interpretation of "narrow neck of land" that I think is inconsistent with--or at least not required by--the text.

(I'm not going to point out areas in which I think this map contradicts the text because that's the inherent problem with abstract maps--they are all entirely subjective. No two people, working independently from the text alone, can possibly create the same abstract map--unless they share a mental image they've previously seen or been taught.)

(I also don't think there is a problem with most of the generic relational maps found in current Church lesson manuals; i.e., Zarahemla is north of the land of Nephi. This helps students follow the text without imprinting an arbitrary abstract map on their minds.)

I think it would be far more productive to develop a Book of Mormon map based on a real-world setting we already know about, which I discuss below.
________________ 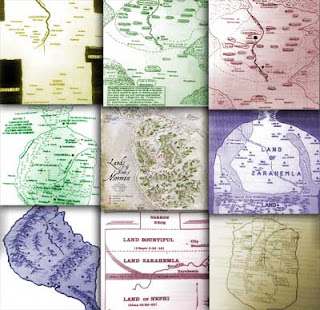 If we're going to depict abstract maps, we should at least show some alternatives. In this case, we have some variation, but not a single map shows Cumorah in New York! A person reading this post would have no idea that a New York Cumorah is even an option (let alone that it was universally accepted as long as Joseph Smith was alive).

In fact, the caption notes that all the maps "exhibit general consistency." I see that as a defect, not a feature.

If the point is that the geography passages in the text are internally consistent, which the narrative here suggests, that's a valid point. But the collage of maps shows a consistency in interpretation, which is precisely the problem with creating abstract maps in the first place. They create a mental image that leads to derivative maps such as these, but not to new or different interpretations.
__________________

One example I've used before is from Xenophon's Anabasis. This is a Greek text that I studied when I was learning Greek many years ago. There's a good introduction to Xenophon here. As a member of a greek army, he wrote a narrative of the Persian Expedition (Anabasis means expedition) in 401 B.C. Like Mormon, he mentioned distances and directions but did not include a map in his narrative. Unlike the Book of Mormon, though, the Anabasis took place in a well-documented area of the world. Consequently, scholars have been able to map the expedition.

Even with all the touchstones--the pins in the map--that Xenophon gave us in his narrative, all well-known in terms of history and geography, scholars continue to debate about particular details of the expedition. For example, here's an article that assesses the ongoing debate about routes and parasangs in the the Anabasis. Look at Map 2 on p. 226. There are four different proposals for the retreat, based on different scholarly interpretations of the river Xenophon was referring to.

Now, imagine how confused Xenophon scholars would be if they had not a single pin in the map. That's what we have when Book of Mormon scholars disregard the New York Hill Cumorah.
_________________

Another example is Lewis and Clark. Thomas Jefferson sent them to explore the "Continent of North American" as Clark phrased it on his 1810 map. Before he left, Jefferson personally taught Lewis how to determine latitude using an octant. Lewis and Clark took rudimentary maps with them.

The Lewis and Clark journals are almost 5,000 pages long. Did Thomas Jefferson create an abstract map based on their narrative?

Lewis and Clark (well, Clark) created 140 maps! Plus, they collected 30 maps from people they encountered, including Indians and traders.

When they got home, Clark spent years compiling a comprehensive map (the 1810 map). He relied on his personal knowledge, the 170 maps they accumulated, and interviews with Indians and traders. It was a remarkable accomplishment, but if you compare it to a google Earth map, you'll immediately see the errors.

It was an effective map for people operating on the ground, following rivers and landmarks, but it was not "accurate" in the sense we're used to today.

Now, if someone were to take the 5,000 pages of journals and try to create an abstract map, would they come up with something close to Clark's map? Probably. Why?

Because everyone already has a mental image of what North America looks like.

Yet that's what Book of Mormon scholars are trying to do when they reject the New York setting for the Hill Cumorah.

What would make more sense, IMO, would be a serious, multi-disciplinary effort to analyze the text using the New York Cumorah as a starting point--as a pin in the map. Throw out the mental images of the "narrow neck of land" in Central America--after all, that feature is found in exactly one verse in the entire text, Ether 10:20--and see what we come up with.

[Because the image of the Central American narrow neck has been imprinted on the minds of nearly every Latter-day Saint by now, it may require non-LDS people to do this experiment. Unfortunately, most non-LDS who have heard anything about the Book of Mormon have also had this image imprinted, so we'd probably have to find people who have never heard of Mormons before.]

People who object to the New York Cumorah can at least accept this challenge as a testable hypothesis.

It would be interesting to see how many variations people would develop, even when they have a solid starting point in New York.

We would always have differences of interpretation about details, as in the case of the Anabasis, but at least we might have an overall map that works in the real world and incorporates all of the geography "clues" in the text.

Even better, we could add the second pin--Zarahemla in Iowa.

I think we'd end up with something such as this: 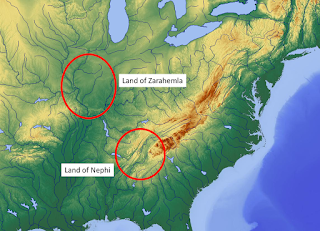 You fill in the blanks for Cumorah, Bountiful, etc.