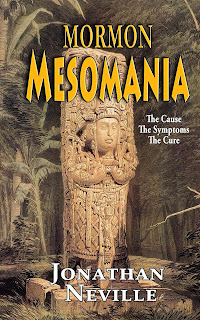 The Mesomania book is now on Amazon. You can find it here. This is an Amazon exclusive version, titled Mormon Mesomania.

By way of explanation, I'm not criticizing any current LDS scholars. I fully respect their efforts and deeply appreciate the good work they've done in many fields. Plus, they're great people. I just think they're making a fundamental mistake about the geography question and I'm just trying to understand the psychology behind the Mesoamerican theory. It's a fascinating topic, and I have a much longer manuscript, but everyone wants short books, so I made the Mesomania as short as I could.

For those new to this blog, I don't care what anyone thinks about Book of Mormon geography and historicity so long as it works for them and gets them to read the text and incorporate the teachings.

And I think the Mesoamerican theory is a distraction that deters people from accepting the Book of Mormon as an authentic history. Of course, there are some people who find great value in seeing Mesoamerican culture in the text. That's fine. As I said, whatever works. You can apply the scriptures to yourselves by reading into the text attributes of African culture, Chilean culture, etc.

But when the scholars present only the Mesoamerican theory to their students (or, just as bad, an abstract map theory), and seek to present only that theory to the world through missionary work, in my view it's a serious mistake because, as Joseph Fielding Smith warned, the theory causes members (and investigators) to become confused and disturbed in their faith in the Book of Mormon.

I think the Mesoamerican distraction originated with Benjamin Winchester, William Smith and others in the 1840s, but it died down until the 1920s when the limited geography setting in Mesoamerica was developed by RLDS scholars. They were the first to reject the New York Cumorah; so far as I can discover, not a single person who knew Joseph rejected the New York Cumorah.

LDS scholars at BYU gradually adopted the RLDS position over the objection of Joseph Fielding Smith, and that's where we are today.

I'm hoping we can change course, embrace Letter VII and the other early teachings, and become united as LDS who have full faith in the historicity of the Book of Mormon.
__________________

In Mesomannia, I explain my views on the psychology that drives the effort by modern LDS scholars to promote the Mesoamerican theory. Among other things, they are seeking to accomplish these objectives:

2. Reject David Whitmer's accounts because he, too, was a speculative, unreliable man who lacks credibility.

3. Portray Joseph Smith as an uncertain man who 1) embraced a false tradition about the Hill Cumorah in New York and 2) changed his mind about the North American setting and embraced a Mesoamerican setting with the expectation that modern LDS scholars would answer the questions about Book of Mormon geography.
________________

For me, those objectives undermine faith and are the fulfillment of Joseph Fielding Smith's warning.

And it's all so unnecessary.

Which is why I want to understand the psychology, and why I wrote Mesomania.
Posted by jonathan3d at 10:10 AM