The Tragedy of Saints

When I first heard about the new book series titled Saints, I was enthusiastic. It was being organized and written in an interesting narrative style. There is a tremendous need for a clear, concise, accurate and well-documented source for Church history, especially among readers who don't read English.

Saints fills that need very well. I'm still enthusiastic about the book series. I support the series and encourage everyone to read it. Everyone involved with Saints has done phenomenal work and deserve our gratitude for a job well done.

But... in subtle yet unmistakable ways, and probably unintentionally in many respects, Saints pushes revisionist Church history.

I think this is a tragedy.

To help people see what has happened, I'm publishing a series of comments on Saints, coming from a faithful perspective. I'm providing the original sources and significant events readers will not find in Saints.

I'll cover each chapter, first on a blog and eventually in print and e-book. Here is the blog:

You may think it's much too late to address these issues now that the books have all been translated and printed, but I haven't waited until now. I raised these issues over a year ago with people in charge of Saints, but they decided to proceed with the M2C narrative anyway.

In reality, the print versions don't matter that much. Most readers will get digital copies. Here in Africa, everyone reads e-books. That's true in India and China and most of the world, actually.

Digital editions of Saints in all languages can be edited to educate readers about the teachings of the prophets and delete or edit the existing content accordingly.
_____

The book series is designed to allow people to access Church history in terms of breadth and depth, as this chart shows. 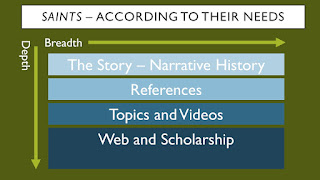 Theoretically, this design allows Church members to learn as much as they want in both directions. As such, it is a wonderful resource. I strongly support the book series and its objectives.

Unfortunately, those sources are still in English.

More unfortunately, the narrative leads readers to accept a particular point of view that I call revisionist Church history. Saints omits key events, changes terminology, includes phony quotations, and obscures important elements in Church history. All of this undermines the objective of educating and inoculating members of the Church and investigators.

Because it is being heavily promoted and translated into 40+ languages, Saints will cement revisionist Church history as the standard. Readers will never learn of key events in Church history that have been the basis of prophetic teachings since the Church was organized.
_____

Even before it was published, I had concerns about Saints because many of the people involved are  within the M2C bubble. They don't realize it; they just assume M2C. And they don't seek or accept input from outside that bubble.

If you ask, most Church historians have a stock answer. They will tell you they are not in the M2C bubble because they don't have an opinion about Book of Mormon geography. They'll say they're neutral, that the issue doesn't matter, etc.

But if it didn't matter, they wouldn't have revised Church history the way they have.

In fact, they'll say they carefully avoided addressing the issue when they wrote Saints.

But as you'll see in my commentary, "carefully avoided" means "deliberately changed" the history. Saints changes wording and omits references to censor what early Church leaders said about the New York Cumorah and related issues.

I'm not reading minds; I don't care about motivations, anyway. I'm just looking at the words on the page.

Saints was written to accommodate M2C.

Think about this. To "avoid" the issue of Book of Mormon geography they had to revise and censor Church history.

What does that tell you about the original sources?

It tells you that the original sources support and affirm the teachings of the prophets about the New York Cumorah.

People inside the M2C bubble don't want Church members to know what the prophets have taught, and they successfully wrote Saints to accomplish this, all the while pretending it's not an important issue.

Church history is fascinating and faith-affirming, but many Church members don't know much more than the basics. This makes them susceptible to claims by critics that the original accounts are wrong.

Such critics come from both outside and inside the Church.

The old History of the Church was helpful, but ultimately misleading and incomplete. For example, its editors converted third-person accounts into fictitious first-person narrative by Joseph Smith.*

More recent publications favor the revisionist Church history that teaches Joseph never actually used the plates, Joseph and Oliver were wrong about the New York Cumorah, and lately that Joseph didn't actually translate the plates after all (the Early Modern English-Other Translator theory).

I disagree with the revisionist historians because I think the evidence supports what the original prophets taught. Plus, all of their successors have affirmed these teachings.

Church members are best served by the truth. Then they are immune to the critics, whether they come from outside or inside the Church. Revising Church history to accommodate M2C and other theories is not helpful.
_____

People are going to tell me that I'm wrong to criticize Saints because it has been "approved by the Brethren."

First, I fully support the Brethren in everything they do. There has been a tremendous need for an accurate Church history in multiple languages. Saints is an important, even critical project.

Second, the books were written by employees, not Church leaders. I realize that some employees like the 14th Article of Faith, but I don't think most of them do, and I don't either.

Fourth, the Brethren necessarily and understandably trust and defer to the experts. It's not their fault when the experts mislead the Brethren or don't give them multiple points of view to consider before making decisions.

Here's an example of what I'm writing about.

The series Saints has four volumes. The respective titles are passages from Joseph Smith's famous Wentworth letter, as shown below. But this is especially ironic because the Wentworth letter is one of the most notorious examples of M2C censorship.

Here's the relevant excerpt from the Wentworth letter.

Our missionaries are going forth to different nations, and in Germany, Palestine, New Holland, Australia, the East Indies, and other places, the Standard of Truth has been erected; no unhallowed hand can stop the work from progressing; persecutions may rage, mobs may combine, armies may assemble, calumny may defame, but the truth of God will go forth boldly, nobly, and independent, till it has penetrated every continent, visited every clime, swept every country, and sounded in every ear; till the purposes of God shall be accomplished, and the Great Jehovah shall say the work is done.

The Correlation Department censored a key passage from the Wentworth letter in the lesson manual, Teachings of the Presidents of the Church: Joseph Smith.

Regardless of any rationale behind this censorship, the result is the same as we see in the editorial decisions in Saints; i.e., people don't want members of the Church to read the teachings of the prophets about the New York Cumorah and related issues because those teachings contradict M2C.
_____

I reiterate that I love the book series. I think Saints will make a big difference for people throughout the world.

I just think it's a tragedy that for purposes unrelated to accuracy, we're getting revisionist Church history that accommodates the M2C intellectuals but leaves readers confused and disturbed in their faith in the Book of Mormon.
_____

* The most famous example of this remains in the Introduction to the Book of Mormon:

Joseph never said that. The statement was Wilford Woodruff's summary of what Joseph said during an entire day, and Woodruff didn't put it in quotations.
Posted by jonathan3d at 10:58 AM