Over the years, a lot of people have asked me to respond to the CES Letter. I know plenty of people who have left the Church, gone inactive, or stopped investigating because of the CES Letter.

To the extent that my explanations would make sense, the critics could deflect them by simply pointing back to the cartel as the true guides of the Church.

Seriously, as long as our own intellectuals are teaching that the prophets are wrong, what more harm can the CES Letter do anyway?


Does anyone think reading the CES Letter is worse than having students attend CES or BYU only to be taught the Book of Mormon by reference to a fantasy map that repudiates the teachings of the prophets?

To be sure, the cartel has responded to the CES Letter.  There has been some give and take between the cartel and the CES Letter, leaving the whole thing in somewhat of a stalemate in which all sides can confirm their own biases.

The question is, what would unbiased observers think?

We're talking about the vast majority of the billions of people on the planet. Most don't care, but if you knew nothing about the Church except the CES Letter and the responses from the M2C citation cartel, which would you find more persuasive?

Frankly, I find many of the cartel's responses unpersuasive, but I'm not in the M2C bubble, and I assume those answers satisfy people who live in that bubble.

Not that I agree with the CES Letter, either. I think the author raised some good questions that many people have, and, if I shared his assumptions, I'd probably agree with him. If I shared the M2C assumptions, I'd be in the M2C bubble and I'd agree with them. I'd be stuck making the same unpersuasive answers that the cartel has provided. In both cases, it's bias confirmation.

One thing the CES Letter and the M2C citation cartel agree on: the belief that the scholars are right whenever they disagree with the prophets.
_____

The CES Letter is in the news because of a Spiderman comic that put a CES Letter label on the superhero's costume.

LDS Living has made sure that tens of thousands of Church members and their families will learn about the CES Letter if they already haven't.

Their article links to this one in the hollywood reporter:

I doubt many LDS have read the hollywoodreporter, but now they will. (I used to read it all the time for work, but haven't looked at it in years until now.) 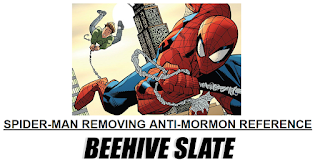 In case there are any LDS or critics who haven't read the CES Letter, the Beehive Slate featured it as a major headline.
http://beehiveslate.com/ linked to businessinsider.

So far, the news hasn't arrived here in Africa, but I suppose it will soon enough. I suppose everyone in the world will know about the CES Letter. It's an impressive feat of persuasion by the person who slipped it in. Removing it was even more impressive, considering all the coverage it has received.
_____

Back to the question of my response.

Until LDS scholars decide to accept the teachings of the prophets, including the ones they disagree with, a response is futile.

Still, I'll explain my approach and then give an example of how I would respond.

The CES Letter is an exercise in bias confirmation, as most such argumentation is. Its logic is generally sound. If you accept the premises, the conclusions follow. What you really have to do is assess the premises.

That's what I've been doing with CES Letter, the M2C citation cartel, and other issues I haven't addressed publicly.

Here are the results from the M2C citation cartel.

1. M2C premise: Joseph wrote the anonymous articles in the 1842 Times and Seasons that provided the foundation for the Mesoamerican/two-Cumorahs theory. Joseph was an ignorant speculator who  changed his mind about Book of Mormon geography and thereby confused, if not misled, the Church until LDS scholars rescued everyone with the M2C theory.

IMO, the facts contradict that premise on many levels, but basically I think Benjamin Winchester wrote the articles, that William Smith was the acting editor of the paper, and that W.W. Phelps was helping to edit. Joseph had nothing to do with them and, once they were published, he resigned as nominal editor. Consequently, these anonymous articles have zero prophetic authority and the entire M2C theory is based on a mistake in Church history.

2. M2C premise: The Hill Cumorah cannot be in New York and therefore all the prophets who taught that have been wrong.

IMO, the facts corroborate the New York Cumorah, both in terms of Church history and modern archaeology, anthropology, geology, etc. Oliver and Joseph actually visited Mormon's depository of records in the New York Cumorah, so when Oliver wrote Letter VII and stated it was a fact that the final battles took place there, he had good reason to do so. Joseph concurred by having Letter VII copied into his personal history as part of his life story and by having it reprinted in all the Church newspapers while he was alive.

3. M2C premise: there was only one set of plates, and the inexplicable events in Church history are the product of faulty memory, naive folk beliefs, and general confusion.

IMO, there were two separate sets of plates, which explains most of the otherwise inexplicable events and shows the original participants were telling the truth.

IMO, the evidence from Joseph and Oliver, as well as the canonized revelations, shows Joseph did use the plates.

5. M2C premise: Joseph didn't even translate the ancient record because the text is archaic and sophisticated Early Modern English.

I've been addressing this premise in detail in the latest series on the blog.

This is a long way of saying that I believe what Joseph and Oliver taught, and I think the evidence corroborates what they said, not what the M2C citation cartel or the CES Letter say.
_____

The CES Letter made a point about The Late War. I'm told it now just links back to the previous study, and I assume that's because the data from the Early Modern English theory (EME) goes a long way to prove that Joseph didn't copy The Late War.

That's the type of research that is beneficial for everyone. Lets get the facts out and eliminate faulty premises whenever we can.

The problem that remains is two-fold.

First, the M2C citation cartel responded to The Late War by claiming Joseph never read the book, a claim I consider unpersuasive for all the reasons I've given. When I read through the FairMormon responses in detail, I wonder if anyone outside the M2C bubble believes what they're saying. As long as these "guides for the Church" claim The Late War had no influence on Joseph Smith, unbiased observers are going to lean toward believing Joseph was influenced, and maybe copied some of The Late War into the Book of Mormon.

(By now, readers know that I think Joseph did read The Late War, adding its language to his own mental language bank, which naturally came out through his speech when he dictated the Book of Mormon. But that's not copying or even using the book.)

Second, EME does show that the syntax in the Book of Mormon is, in many respects, unlike that in the Bible or The Late War. That defeats the claim of plagiarism or copying. But EME goes further and claims that the Book of Mormon text is too sophisticated and archaic for Joseph to have been the translator.

Consequently, the M2C citation cartel have now managed to persuade at least people in the M2C bubble of these three key points:

Every whack against the ties between the prophets and the Latter-day Saints weakens the remaining ties.

As long as we have a scholars vs. prophets problem going on at BYU, CES and COB, the CES Letter vs. prophets is a secondary concern.