Is John Dehlin running out of money, out of ideas, or both?

Usually I avoid topics that I don't want to bring attention to. I discuss them with small groups of people instead of openly and publicly like this.

For example, there's a sense that maybe the impact of critics such as John Dehlin and Jeremy Runnels has peaked. While I find it tragic that issues related to SITH and M2C have led so many people to leave the Church, question their faith, or decline to meet with or continue with the missionaries, maybe their influence is waning. Maybe most people who are troubled by these issues have already worked through them, one way or another.

To be clear, that's not my opinion or experience, but because data is impossible to come by, anything is possible.*

The other day John posted a video/podcast titled "Questions I Would Ask Richard Bushman."

He spent two hours asking a series of loaded questions along the lines of "Have you stopped beating your wife?"

(To understand the logical fallacy of loaded questions, there's a good overview here.)

He expressed frustration that faithful LDS tend to avoid his podcast, but anyone listening to this example would be wise to avoid his show.

While I don't recommend it, you can listen/watch here:

FWIW, I listened to it while on a driving trip. I didn't waste two hours; I accelerated the replay. 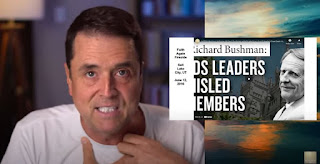 John could have listed his questions in a brief post. That might have led to a constructive dialog that several people could have participated in.

For example, I'd be happy to address John's questions.

Instead, John took a video clip out of context and expanded it into a tirade.

He sounds/looks like he was venting his frustration that his audience and donors are declining and he is running out of ideas.

I respect John for his early work, when he seemed to be sincerely seeking answers and explanations. He pointed out problems with Church history narratives, Book of Mormon historicity, etc. He engaged with a variety of perspectives, both faithful and critical. Like Jeremy Runnels and his CES Letter, John's objections originated with what he had been taught and his perception that he'd been misled or lied to.

(Unfortunately, our SITH and M2C scholars have largely agreed with the critical approaches to these issues, as we've discussed many times on this blog and elsewhere. For example, our top LDS scholars now agree that Joseph never really translated the plates, that Joseph and Oliver misled Church members by teaching that Cumorah was in New York, etc.)

Lately, though, John's podcasts have been repetitive recitations by undoubtedly sincere people who, for one reason or another, have "left the Church." Naturally, these guests confirm John's biases.

In the meantime, I've discussed some of his points on my blog here: