On June 11th, I wrote, "Maybe the people telling me about it are wrong and the Witnesses movie relates everything the witnesses said.
I can't wait to see."
Well, now I've seen.
Witnesses is a movie that E.D. Howe would have made, or at least admired, because he basically wrote the script in 1834.
_____
We arrived in Utah Thursday morning and managed to catch a showing of Witnesses. (Now having contributed $20 to the Interpreter Foundation, less whatever cut goes to the theater, distributor, and others, does that make me an honorary "interpreter" too?)
I left the theater wondering what the purpose of the movie was. 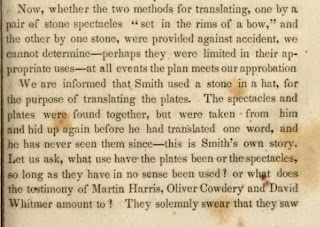 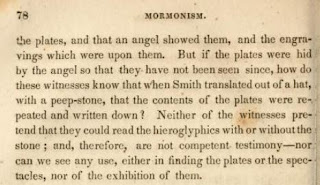 You can see these pages here:
https://archive.org/details/mormonismunvaile00howe/page/76/mode/2up
On page 18, Howe wrote the script for Witnesses about the mode of translation:
https://archive.org/details/mormonismunvaile00howe/page/18/mode/2up
Throughout the movie, the Witnesses filmmakers emphasized SITH (stone-in-the-hat). I can't figure out what these SITH-sayers hope to accomplish by introducing Howe's argument to modern audiences.
We do see Joseph fighting off attackers to protect the plates, hiding them under the floor, etc.
We see people curious about the plates, eager to see them.
But then the film emphasizes the SITH-saying claim that Joseph never actually used them, or the Nephite interpreters, aka the Urim and Thummim (U&T).
Which as you can see above was Howe's point.
_____ 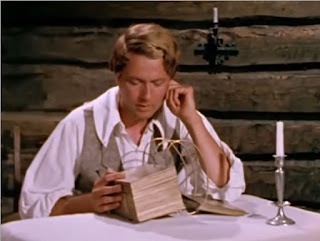 Over 50 years, ago, BYU produced a film written by Carol Lynne Pearson that, while definitely dated in terms of pacing, was more historically accurate than Witnesses.

That film showed Joseph translating the plates. Oddly, it didn't show the Urim and Thummim, possibly because of the inconsistent descriptions of the instrument.

We'll have to wait longer for a historically accurate update to the 1968 film. Ironically, Witnesses was dedicated to Richard Lloyd Anderson, who was a consultant on the more accurate BYU film.

_____
Witnesses goes out of its way to misinform viewers about key historical facts. For example, it shows David Whitmer saying it took 3 months to translate, when he actually (and accurately) said it took 8 months. The film depicts Oliver coming up with the idea of asking David Whitmer to pick them up from Harmony, when it was the Lord who commanded Joseph through the Urim and Thummim to contact David--a man he had never seen before, but whom Oliver knew.
When we read Lucy's account of the events, we can see why the SITH-sayers keep omitting it. Instead of describing a seer stone in a hat, Lucy describes Joseph applying the U&T to his eyes and looking on the plates, which is what Oliver, Joseph and the scriptures always said, but SITH-sayers insist those sources are all wrong. 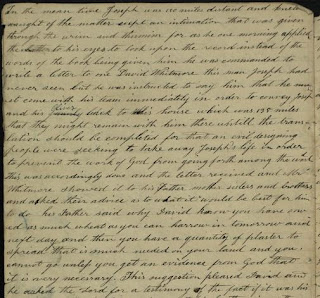 In the mean time Joseph was 150 miles distant and knew naught of the matter e[x]cept an intimation that was given through the urim and thumim for as he one morning applied the<​m​> latter to his eyes to look upon the record instead of the words of the book being given him he was commanded to write a letter to one David Whitmore [Whitmer] this man Joseph had never seen but he was instructed to say him that he must come with his team immediately in order to convey Joseph and his family <​Oliver [Cowdery]​> back to his house which was 135 miles that they might remain with him there untill the translation should be completed for that an evil designing people were seeking to take away Joseph’s life in order to prevent the work of God from going forth among the world This was accordingly done and the letter received and Mr Whitmore showed it to his Father mother sisters and brothers and asked their advice as to what it would be best for him to do...
Rather than inform people about the historical facts, SITH-sayers such as the Witnesses movie create a revisionist history to support the E.D. Howe version of events.
I'm not going to list all the historical errors in the film; after all, it was only "based on true events."
But I don't understand the point of a film that tells us what we already knew--the the witnesses remained true to their testimony--while both
(i) emphasizing the SITH narrative that undermines the relevance of their testimony and
(ii) omitting testimonies from the witnesses that explain and corroborate the literal historical reality of the events. 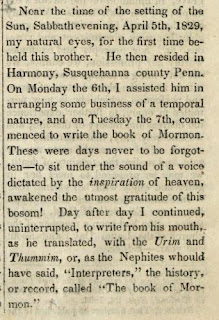 They never show Oliver Cowdery's consistent teaching that Joseph translated with the Urim and Thummim.
In 1834, Oliver responded to Mormonism Unvailed by writing the famous passage that is now a footnote in Joseph Smith--History in the Pearl of Great Price.
You can see the original here:
https://archive.org/details/latterdaysaintsm01unse/page/14/mode/2up
Even when the film depicts Oliver's famous discourse upon rejoining the Church, Witnesses omits what he said about the translation.
It's not easy to avoid what Joseph and Oliver taught about the Urim and Thummim, but Witnesses manages to accomplish that, just like the rest of the revisionist history we're being fed today.
_____
Naturally, we all know that David and Emma and Martin made statements that, on their face, relate the SITH narrative. But those statements are always quoted out of context, the context being the Solomon Spalding explanation for the Book of Mormon that Mormonism Unvailed first published.
Howe was clever, but why are our scholars so unable to figure this out?
Howe set them up by stating SITH as a fact (while also clearly distinguishing between the "peep stone" and the "Urim and Thummim," a distinction our modern scholars seek to blur).
Then Howe proposed the Spalding theory as an explanation for the Book of Mormon.
The Spalding theory required Joseph to be dictating from behind a screen or curtain because he was supposedly reading from the Spalding manuscript.
Obviously, the Spalding theory contradicted SITH, but that was exactly the point.
It was a set up.

(a) If Joseph, Oliver and his scribes explained that Joseph dictated from behind a screen or curtain because he couldn't show anyone the plates or U&T, that would corroborate the Spalding theory.
(b) If Joseph, Oliver and his scribes claimed Joseph merely read words off a seer stone, that meant (i) he didn't really translate the plates, (ii) the plates (and the U&T) were not evidence of the antiquity of the text, and (iii) the entire narrative collapsed on itself.

Joseph and Oliver (and their successors), as well as the scriptures, solve the dilemma by teaching the truth and letting people infer the circumstances. They emphasized that Joseph translated the engravings on the plates. Joseph said he actually copied and translated the characters. They all testified that Joseph used the Urim and Thummim that came with the plates. And they also testified that Joseph could not show the plates or U&T to anyone except designated persons. Thus, it is obvious to those who believe Joseph that he had to translate in a concealed manner (except, presumably, with Oliver who had been authorized to translate as well).
The key point: It was Joseph's translation of the plates and use of the U&T that made the testimony of the witnesses relevant.
But years later, in their effort to defeat the Spalding claim which had dominated the media in the 1800s, David, Martin and Emma taught SITH, based, IMO, on a demonstration Joseph conducted in the Whitmer home.
This is all a simple, clear explanation that reconciles all the evidence without adopting the Howe position.
But Witnesses chose Howe instead.
Incredible.
_____
As of yesterday, the film has reportedly grossed $538,797. Hopefully that's what the producers expected. At an average ticket price of about $10, let's say that's around 50,000 people who have seen the film.

Presumably most viewers have been LDS in Utah, Idaho, and Arizona. If so, they've already been taught SITH (stone-in-the-hat) by the Saints book, the Gospel Topics Essay, and the January 2020 Ensign (none of which address what Joseph and Oliver and the scriptures say).

In that sense, the movie will confirm a few biases and reinforce the revisionist historical narrative that rejects the traditional narrative based on what Joseph, Oliver, Lucy Mack Smith, and the scriptures taught. That means it won't do much more damage.

True, John Dehlin and other critics can cite Witnesses as another evidence to support their claim that Church leaders "covered up the real history," but those who read actual history instead of the revisionist spin can see that Church leaders always taught the truth about the translation.

There are lots of ways to review a movie. Filmmakers make innumerable choices and second-guessing them is part of the fun of writing and reading reviews.

Technically, Witnesses was fine, with good cinematography, sets, and music. The editing was mostly fine, although the long opening scene was repeated in full later in the film, which felt like padding. Audiences expect a setup and payoff, but in this case, the payoff was a dud because everyone watching the film knew David would survive beyond 1833. That's not even a spoiler alert because it was made clear in the movie from the outset (when the reporter comes to visit the much older David Whitmer).

I was quite surprised with all the emphasis on the Kirtland banking collapse. The history there was muddled and the film left viewers confused. Given the constraints of filmmaking, I was very surprised they chose to focus on such an arcane and uncinematic episode from Church history. Maybe it looked okay in the script, but on the screen, it was a mess.

As I said before I saw the movie, I hoped/expected them to show some of the important corroborating details the witnesses gave us, including the messenger who took the abridged plates from Harmony to Cumorah before taking the small plates of Nephi to Fayette.

I hoped/expected them to show Joseph and Oliver visiting the repository of Nephite records in the Hill Cumorah, since both Oliver and David spoke about that important confirmation of the historical reality of these events.

But being a film from the Interpreter Foundation, a member of the M2C citation cartel, we already expected they would present revisionist history that accommodates M2C (the Mesoamerican/two-Cumorahs theory).