A few days ago we were visiting the Louvre in Abu Dhabi and spent some time in the opening exhibit that celebrated similarities among cultures around the world and throughout time. 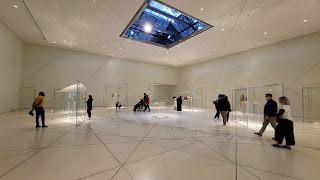 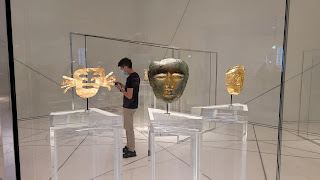 This display of Gold Masks from Northern China (907-1125), Lebanon (600-300 BCE), and Peru (100 BCE - 700 CE) asked the question, "Why is it that so many civilizations covered the faces of the dead in gold? Does gold, as an incorruptible substance, confer eternal life, liberating our existence from the fine realm? With its luster, it perpetuates the light of life by suppressing the darkness of death... Immortality appears to be the universal hope of mankind when faced with death."

The other displays featured 3 similar examples each of decorated vases, sculpture of motherhood, houses of the dead, figures in prayer, and dancing figures from around the world, dating as far back as 2800 BCE. The exhibit emphasized the commonality of people regardless of culture.

It reminded me of the futility of finding "correspondences" as evidence of the Book of Mormon in Mesoamerica.

One of the main M2C apologist arguments consists of finding "correspondences" between Mayan culture and the text of the Book of Mormon.

Part 3: Correspondences from Archaeology and History

The entire book consists mainly of illusory correspondences; illusory because they are typical of most, if not all, human societies.

Terryl Givens' infamous Foreword to the book notes that "this present work encompasses hundreds of 'correspondences,' or points of 'particular similarity' involving geography, chronology, archaeology, biology, and other disciplines..."

Therefore the Nephites were Mayans.

We can all see it's a ridiculous logical fallacy, but our M2C scholars have nevertheless "sold" it to Latter-day Saints who are eager to reject the teachings of the prophets about the New York Cumorah.

Of courses, there's nothing inherently irrational about finding such "correspondences" between the Book of Mormon and real world cultures. The Book of Mormon describes real people living in the real world, and as the Louvre exhibit showed, people everywhere have similarities in their cultures.

What's irrational is thinking that these correspondences outweigh the teachings of the prophets, particularly what Joseph and Oliver said.

And particularly when there are even closer "correspondences" between the text and the ancient inhabitants of North America.