In my previous post, I mentioned my interview with Mormon Book Reviews, which has now been posted  here:

At the outset, I emphasize that these LDS scholars are fine people, faithful Latter-day Saints, etc. Their followers are likewise. They've done some wonderful research to help us all better understand the scriptures, etc.

My objection is (i) the way they insist everyone must agree with their interpretations, and (ii) the way they suppress and censor the teachings of the prophets to persuade people to follow their theories.

This diagram shows how the most prominent LDS gatekeepers operate with respect to the hill Cumorah. They follow the same pattern regarding the translation of the plates.

As I've pointed out many times, the gatekeepers (citation cartel) work hard to prevent Latter-day Saints from the first step; i.e., they prevent us from even reading the teachings of the prophets.

The Gospel Topics Essay on Book of Mormon Translation is a prime example. It doesn't even quote what Joseph and Oliver taught, but instead focuses on the theories of the scholars who wrote the essay.

BTW, it's interesting to review the history of the Gospel Topics Essays.

In June 2013 John Dehlin and others wrote a Faith Crisis Report.

The report was an effort to understand and respond to the individual faith crises that were becoming more prevalent with the advent of the Internet. The report was apparently a factor leading to the creation and publication of the Gospel Topics Essays as discussed below. You can read the entire report here:

By far, the top four reasons respondents gave for their loss of belief were they ceased to believe the doctrine/theology, they studied Church history and lost their belief, they lost faith in Joseph Smith, and they lost faith in the Book of Mormon.

Instead, those who leave have concluded that Joseph did not translate any ancient plates.

And yet, some of our leading LDS scholars are spending millions of dollars to convince everyone that Joseph didn't actually translate the plates, but instead employed SITH.

The scriptures have long warned about the dangers of building on a sandy foundation. There can hardly be a more sandy foundation than SITH and M2C, as we see in the survey in the Faith Crisis report.

The progression away from the teachings of the prophets looks like this: 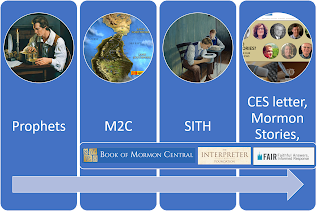 First, the scholars say Joseph and Oliver were wrong about Cumorah being in New York. This, despite the historical record showing that it was Moroni who identified the hill as Cumorah the first time he met Joseph Smith.

The scholars unilaterally decided that the "real Cumorah" must be in Mexico (M2C for the Mesoamerican/two-Cumorahs theory). A few claim other versions of M2C, such as Cumorah in Baja, Panama, Chile, etc.; anywhere else other than western New York. The M2Cers teach that Joseph and Oliver were ignorantly speculating about Cumorah. They also teach that all of their successors who reiterated their teachings about Cumorah, including members of the First Presidency speaking in General Conference, were wrong.

Then, using the teachings of the SITH/M2C citation cartel, critics such as CES Letter and Mormon Stories persuade people that Joseph and Oliver were liars and therefore the Restoration is a fraud.

Our SITH/M2C scholars respond that although Joseph and Oliver misled people about some things, including Cumorah and the translation, they were honest about other things.

No wonder so many people are confused.

John Dehlin's Faith Crisis Study prompted the development of the Gospel Topics Essays, which were never intended to replace the Standard Works and teachings of the prophets. These essays were written by the same scholars who were promoting M2C and SITH.

The purpose, supposedly, was to inoculate Latter-day Saints before they were exposed to the teachings of the critics.

Instead of inoculating, these essays inadvertently infected Latter-day Saints by disregarding the teachings of the prophets in favor of the theories of the scholars who wrote them.

Not only that, but the scholars who wrote the Gospel Topics essays cite their own work as official doctrine.

It's an amazing accomplishment on John Dehlin's part. 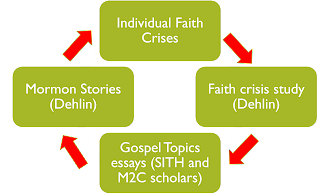 Anyone who pays attention to General Conference knows that Church leaders continually admonish us to study the scriptures and the teachings of the prophets, including authentic Church history. They don't ask us to rely upon or defer to the theories of the intellectuals in the citation cartel.

Everyone can read all of these things and make their own informed decisions.

According to the scriptures, there is only one legitimate gatekeeper.

41 O then, my beloved brethren, come unto the Lord, the Holy One. Remember that his paths are righteous. Behold, the way for man is narrow, but it lieth in a straight course before him, and the keeper of the gate is the Holy One of Israel; and he employeth no servant there; and there is none other way save it be by the gate; for he cannot be deceived, for the Lord God is his name.

13 ¶ But woe unto you, scribes and Pharisees, hypocrites! for ye shut up the kingdom of heaven against men: for ye neither go in yourselves, neither suffer ye them that are entering to go in.
(Matthew 23:13)