The End of Growth? and why?

We all know that the growth of the Church has stalled. The topic is explored in a recent article titled "The End of Growth? Fading Prospects for Latter-day Saint Expansion" by David G. Stewart, Jr., University of Nevada, Las Vegas.

You can read it here: http://jmssa.org/stewart/

The article poses this question--Why Did Predictions Fail?--and offers several answers, but inexplicably Stewart omits the elephant in the room; i.e., the changes in the historical narrative (i.e., M2C and SITH) that undermine the credibility of the the keystone of our religion.

Local leaders and missionaries throughout the world know that members and friends (investigators) inevitably encounter critical narratives on the Internet. When they seek answers, they end up with "faithful" narratives that promote M2C and SITH.

Once, the New York Cumorah was the one sure connection between the modern world and the world of the Book of Mormon, taught and reiterated by prophets and apostles.

Now, our scholars tell us the one sure thing we know about Book of Mormon geography and historicity is that the prophets were wrong about Cumorah.

The more our M2C/SITH scholars prevail, the worse the growth prospects for the Church. How could it be otherwise? 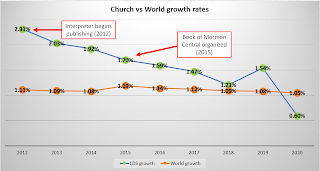 Why Did Predictions Fail?

The vision of the Church of Jesus Christ of Latter-day Saints becoming a major world faith has become increasingly implausible. While the Church will continue to be influential in North America, a prominent fixture in Latin America, a leading faith in parts of Oceania, and emerging in Africa, a future of sustained worldwide growth can no longer be assumed....

Claims that declining Mormon growth is an inevitable result of external factors are disconfirmed by the more rapid growth of other Christian sects. Over the past three decades, both the Seventh-day Adventist Church and the Jehovah’s Witnesses have overtaken and pulled far ahead of the LDS Church.

Stewart discusses these impediments to growth, reflecting a process-oriented approach:

A review of Stewart's article in the Salt Lake Tribune offers some context and analysis.

Church critics, Stewart acknowledged, would no doubt chalk up his pessimistic projections to the idea that the faith’s beliefs and practices no longer resonate with many in today’s world.

“I disagree with that,” he said. “The shortfall in the growth of the LDS Church is not ultimately about the message. It’s been, in my view, about the way that the message has been spread.” ...

Stewart and Martinich suggested more training, tools and manuals aimed at equipping lay members in the effort of finding and teaching those receptive to the faith’s message.

“The mantra ‘every member a missionary,’ introduced by President David O. McKay in 1959, has remained an empty slogan,” Stewart writes, “with actual performance reflecting nearly the opposite.”

We've discussed this issue on this blog several times before, such as here: