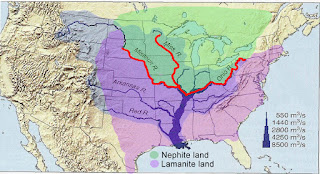 Lots of people are asking me to explain Book of Mormon geography on this blog. I haven't done so yet because, in my view, it's important first to set the record straight on Church history. There is still some resistance; i.e., there are still people who cling to the unsigned 1842 Times and Seasons articles about Mesoamerica, reasoning they are more informative than everything Oliver Cowdery and Joseph Smith wrote because... well, because they like the idea of Mesoamerica better than New York and the Midwest. Maybe because Mesoamerica is more exotic? More mysterious? Or is it because ordinary people can't make sense of it, so they have to rely on the expertise of the Mesoamericanists? Seriously, I can't understand the obsession with the ridiculous and anonymous Times and Seasons articles. And without those, there is zero rationale for putting the Book of Mormon events in Mesoamerica.

At any rate, the North American setting is pretty simple. Here you can see the overview. Basically, the green is Nephite territory and the purple is Lamanite territory. (This is an overlay on a hydrology map, which is important to the explanation.) I have detailed maps showing proposed sites for the major cities, including Zarahemla, Cumorah, Bountiful, Land of Nephi, Sidon, place of first landing, narrow neck, etc., along with the related archaeological sites.
The explanation is not as simple as the map because there are hundreds of verses in the text to discuss. The Mesoamericanists have numerous objections; that's why I had to write a book about it.
:)
Posted by jonathan3d at 12:29 PM