Ray Bradbury's classic novel, Fahrenheit 451, describes a future dystopian society in which books are banned. In this society, "firemen" don't put out fires; instead, they burn books.

I once attended lecture by Bradbury at UCLA. He spoke about writing this and other books, some of them on a manual typewriter he had to rent at the school's library. The novel makes us think about the value of books and what we would lose if they were banned. 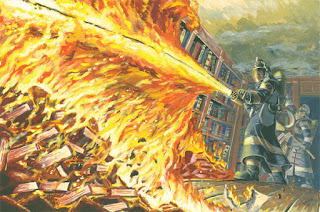 But it also makes us think about the role-reversal of firemen, or as we would say today, fire fighters.

I mentioned in a previous post that Church leaders have lots of fires to put out. While that's true, it's also true that each individual has plenty of fires to put out. There are fires, or potential fires, at every level of our lives: personal, family, work, government, physical, spiritual, moral... the list goes on.

Lots of fires to prevent and extinguish.

As King Benjamin taught in Mosiah 4,

29 And finally, I cannot tell you all the things whereby ye may commit sin; for there are divers ways and means, even so many that I cannot number them.
30 But this much I can tell you, that if ye do not watchyourselves, and your thoughts, and your words, and your deeds, and observe the commandments of God, and continue in the faith of what ye have heard concerning the coming of our Lord, even unto the end of your lives, ye must perish. And now, O man, remember, and perish not.
Because we're so focused on preventing and extinguishing all these fires, we sometimes lose sight of who the arsonists are.

Fahrenheit 451 played with our expectations because we normally look at firefighters as protectors and life savers. Instead, in the novel, the firefighters caused the fires.

Think about this in the context of Church history and Book of Mormon historicity and geography.
_______________

It's no secret that many members of the Church face challenges to their testimonies. I showed some of the fires that consume testimonies, taken from the graphic I posted the other day, including four that I focused on.

1. Book of Mormon not ancient.2. Church lies about its history.3. Poor apologetics backfire.4. 19th century teachings have been silently abandoned.

Each of these is directly related to the "two-Cumorahs" and Mesoamerican theories because those theories, widely taught by LDS scholars and educators, require adherents to believe that Joseph and Oliver were ignorant speculators who misled the Church about Cumorah being in New York.

In my view, this is akin to the firefighters in Fahrenheit 451. The very people we trust to build faith are the ones who question the reliability and credibility of Joseph Smith and Oliver Cowdery.
_________________

Most LDS people who know about Letter VII and its context accept what Joseph and Oliver taught; i.e., that there was one Cumorah and it was in New York. Oliver said this was a fact. He also said Mormon's depository of Nephite records was in the same hill.

And he should know, since he and Joseph visited that depository multiple times.

Unfortunately, unlike in Joseph's lifetime, few LDS today have ever heard of Letter VII.

Letter VII is not only not in the curriculum, it is never even presented to the students.

If you have been taught at BYU, or if you have children attending or planning to attend, you should be aware of what's going on there. Read and share Letter VII and the historical context. You don't have to accept abstract maps or any other map that shows Cumorah somewhere other than in New York.