I'm hearing people say that because "the Brethren have endorsed" Book of Mormon Central (BOMC), FairMormon, and the rest, my comments about what these groups teach are unfounded.

Members of these groups have been trying to transform this so-called "endorsement" of their web pages into official endorsement of their rejection of Letter VII and their promotion of the two-Cumorahs theory.

Plus, the usual suspects are using Elder Holland's talk at the Chiasmus Jubilee, in which he appropriately appreciated and applauded the exceptional work done by so many LDS scholars, as an endorsement of their entire body of work, which he never said.

Instead, in my view, he encouraged the scholars to accept what the Book of Mormon witnesses taught. Of course, Joseph and Oliver, corroborated by David Whitmer, taught that the Hill Cumorah was in New York, but Elder Holland's audience that night was made up mostly of people who have rejected that teaching.

First, the Church web page that supposedly "endorses" these groups specifically disclaims any endorsement. They are marked with **. The caption at the beginning of the link says this:

"Double-starred websites (**) are maintained by a third party that is unaffiliated with the Church. By linking to this content The Church of Jesus Christ of Latter-day Saints does not endorse the content of these sites."
________________

Second, 90% of what BOMC, FairMormon, the Interpreter, and the rest of the Conclave do is great. BOMC's Royal Skousen material alone makes it a valuable resource. FairMormon has accumulated some excellent references on many issues. Even the Interpreter publishes some worthwhile material. I refer to these web pages all the time. In that sense, I actually endorse them, as I've made plain on my blogs and in my books.

But I don't endorse everything on their page. As I've explained, I deplore some of their material, and I've tried to work with each of them to introduce another way of looking at the evidence, to no avail with one exception.

To its credit, BOMC still has the first edition of my Letter VII book in their archive, as well as early drafts of two of my other articles about Church history. So far, BOMC is the only member of the Conclave to publish Letter VII (although FairMormon has a link to the entire Messenger and Advocate, which of course contains Letter VII.)

True, it would be awesome if BOMC followed Church policy on neutrality on questions of Book of Mormon geography, but they refuse to do so because they don't want members of the Church to compare the Mesoamerican theory to Moroni's America or the Heartland setting.

(For that matter, it would be awesome if BOMC allowed me to respond to my critics that they welcome in their archive, but they don't, again because they don't want members of the Church to know there are alternatives to the Groupthink of the Conclave. That's why I continue to blog about this stuff, actually.)

Readers of this blog know what's going on. Mesomania rules in the Conclave, and there's no reason to be frustrated about it.

Besides, I think by now everyone realizes that when it comes to Church history and Book of Mormon geography, BOMC is really Book of Mormon Central America. They don't even make a pretense of being otherwise now that they're part of BMAF, whose mission statement is "to increase understanding of the Book of Mormon as an ancient Mesoamerican codex."

[Trigger alert for any Mesoamerican promoters reading this post. Don't read further if metaphors cause you distress.] 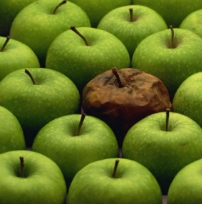 When you read the web pages of the Conclave, it is mainly the Mesomania in 10% of their material (Church history and BofM geography) that is rotten. That rotten core taints the rest because people trust the rest, and they transfer that trust to the rotten Mesomania stuff.

More and more people in and out of the Church are seeing that the Conclave is really in a Groupthink loop.

Until the day comes when they give an equal, fair voice to alternatives to their Mesoamerican Groupthink, or at least acknowledge why faithful members of the Church still trust and believe what Joseph and Oliver wrote in Letter VII, no one should be concerned with their claims about being "endorsed by the Brethren."
__________________

*The Conclave consists of Book of Mormon Central (BOMC), FairMormon, BYU Studies, the Interpreter, Meridian Magazine, FARMS, the Neal A. Maxwell Institute, BMAF (Book of Mormon Archaeological Forum, which owns BOMC), and other groups/publications that reproduce material published from these sources. I used to call them the "citation cartel" because it is a small group of people who work through these organizations and cite one another, but they didn't like the term so I agreed to stop using it. They have called themselves the Conclave, here and here, so I assume that term is acceptable. The Conclave claims their work is peer-reviewed, but I think that really means it is "peer-approved" because they all share the goal "to increase understanding of the Book of Mormon as an ancient Mesoamerican codex." This is why they reject Letter VII and all the evidence that supports and corroborates what Joseph and Oliver taught about the Hill Cumorah being in New York.
Posted by jonathan3d at 7:00 AM