I'm postponing the series on DNA to next week because of an important event I attended last night at BYU.

The Chiasmus Jubilee was a profound experience. The organizers did a phenomenal job. Two days of seminars, concluding with a two-hour presentation of music, video, and talks by important scholars and participants in the study of Chiasmus, capped by a powerful talk by Elder Jeffrey R. Holland, which I'll discuss separately.

For those not familiar with chiasmus, there's an awesome new website here:
https://chiasmusresources.org/. It explains that

Chiasmus is a literary device in which words or meanings are structured in an inverted parallel pattern. For example:
A
B
B
A
This is a simple chiasm. The name of the pattern comes from the Greek letter chi, X, because the pattern crosses, like an X. Chiasmus is frequently found in the Bible, but it was used in ancient Greek and Latin literatures and other sacred writings.
_____________________

Fifty years ago, when he was a young missionary in Germany, John W. (Jack) Welch attended a lecture on Chiasmus in the Bible. He woke up with the idea to look for it in the Book of Mormon. He asked where. The Spirit said start where you left off yesterday. He turned to the passage in Mosiah and he saw, in the German Book of Mormon, two words stacked on top of one another. From there, the inverse parallelism became apparent.

His discovery changed his life and Book of Mormon studies. I made this Ngram on Chiasmus to show the significance of the discovery.

Thanks to Brother Welch's work, scholars around the world of many denominations have recognized the Book of Mormon as an integral part of the study of Hebrew parallelisms. Several of them participated in the Chiasmus Jubilee seminars over the last two days, as well as in the program last night.

I hope the videos and presentations will become available publicly. If so, I encourage everyone to enjoy them. (I posted a copy of the program below. Note that it was organized in chiastic format. Everything about this event was outstanding. It was professional, educational, enlightening, and inspiring.)

Meanwhile, go to the Chiasmus web page and peruse the resources available.

Readers of this blog know I've focused on Book of Mormon Central, the Interpreter, BYU Studies, and the rest. I've tried to make it clear that I greatly admire and respect all the scholars who participate in these organizations and publications. I like them all personally. I read their work and incorporate it into my own study and publications as much as possible.

Chiasmus is a good example. I devoted several chapters to Chiasmus in my first edition of Moroni's America (the topic of an upcoming post). Every member of the Church should at least be familiar with Brother Welch's work on this topic.

Really, the sole area of disagreement that I have with all of these scholars is their rejection of Letter VII and the associated context and ramifications. I won't belabor that here, but I want to make sure readers see the distinction between the excellent work of these faithful LDS scholars and educators and my criticism of their rejection of the witnesses of the Book of Mormon regarding the New York Cumorah.
______________________

Here is the program from last night: 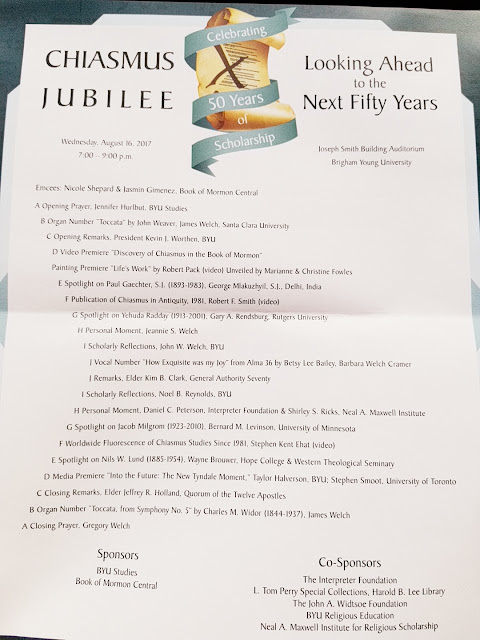